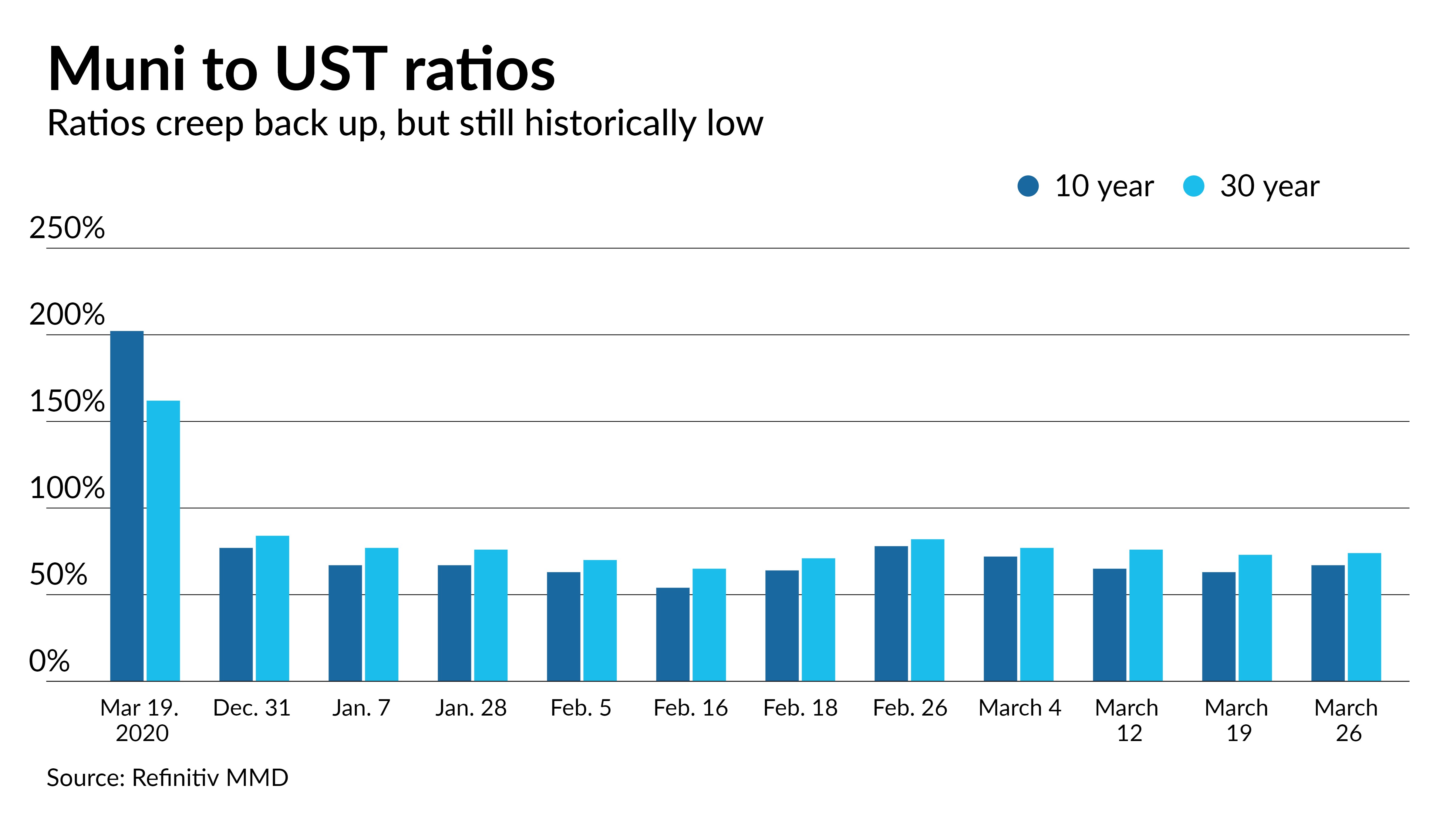 “As Treasury yields have been moving up and down, muni yields have been quite sticky. Historically, tax-exempts outperform when USTs are selling off, but they underperform when Treasuries rally like they did this week,” strategists at Barclays wrote in a Friday report. “In the current environment of supportive market technicals, when rates stabilize, demand for tax-exempts returns, pushing muni yields lower.”

The report, authored by Mikhail Foux, Clare Pickering and Mayur Patel, cited supportive technicals for the asset class, including fund inflows, low dealer inventories and manageable supply, and pointed to the larger portion of taxables as a share of the total.

Funds are getting ready to deploy their cash when an attractive opportunity presents itself, according to Barclays.

“Hence, any municipal selloffs would likely be limited, in our view,” they said. “We remain somewhat cautious as rate volatility might continue, but are not overly concerned about the asset class at the moment.”

The primary drove a lot of the movements in trading in the secondary this week, a boon for issuers tapping the market.

The deal saw refunding savings on a present value basis of nearly $247 million, or 17.1% of the refunded par amount.

The issue was made up of $1 billion of tax-exempt fixed-rate bonds priced by Ramirez & Co. and $228 million of taxable fixed-rates sold competitively.

During the exempt retail order period, TFA said it received $593 million of orders, of which $564 million was usable. The institutional order period saw about $2.1 billion of priority orders, representing 4.7 times the bonds offered for sale.

The supply/demand imbalance is certainly keeping rates lower and part of the reason for muni outperformance, analysts and traders said.

Data says inflation not an issue, yet
Inflation is “not yet rearing its ugly head,” analysts said, based on income and spending data released Friday.

Both personal income and expenditures dropped in February, while personal consumption expenditures also came in weaker than expected, meaning inflation remains in check for now.

Personal income plummeted 7.1% in February after a 10.1% jump a month earlier, the Commerce Department reported. Personal spending fell 1.0% in the month after a 3.4% rise in January.

Economists predicted income would drop 7.3% and spending would fall 0.7%.

But numbers can be deceiving since the stimulus checks issued to many Americans in early January “heavily distorted” that month’s income gains, according to Scott Ruesterholz, portfolio manager at Insight Investment.

“Employee compensation actually rose modestly in the month, pointing to continued labor market improvement,” he said. “Personal income will likely rise substantially again in March as $1,400 checks are paid, and then normalize from there.”

The decline in personal spending follows the path set by February retail sales, which also fell, Ruesterholz said, and comes on the heels of a strong January when consumers spent some of the stimulus money.

“Going forward, accelerating labor market improvement as the economy reopens will be critical to generate sustained spending and income growth,” he said.

The PCE price index climbed 0.2% in February following a 0.3% gain the month prior, while core PCE, which excludes food and energy grew 0.1% in the latest month after a 0.2% increase in January.

Economists estimated that core PCE year-over-year would climb 1.5%, while month-over-month, would tick up 0.1%.

While the report will be discounted as it comes “between massive stimulus bills,” Edward Moya, senior market analyst at OANDA, said the PCE deflator, the “Fed’s favorite inflation indicator,” was still important. “Treasury yields declined after a slightly softer-than-expected PCE deflator reading suggested inflation is not yet starting to rear its ugly head.”

“Over the next few months, base effects will push inflation higher, though improvement in shelter and medical inflation will likely prove necessary to sustain an inflation overshoot,” he said.

The University of Michigan’s final consumer sentiment index for March climbed to 84.9 from 76.8 in February.

Year-over-year, sentiment is down 4.7%, conditions 10.3% lower and expectations are flat.

“The rise in consumer sentiment to the highest level since the pandemic began coincides with faster vaccination, reopening announcements, and stimulus checks,” Ruesterholz said. “Continued recovery in the jobs market should continue to lift consumers’ spirits and willingness to spend down the $1.8 trillion in excess savings they have accumulated since COVID began.”

Friday’s data supports the view the economy is recovering. “It also gives us confidence that this recovery will accelerate meaningfully over the next quarter,” he said, “as the economy reopens and consumers spend more forcefully after a year of pent-up demand for travel and recreation activity.”

The Board of Trustees of the University of Arkansas (Aa2///) is set to price $138.9 million of UAMS Campus various facilities taxable and tax-exempt revenue bonds on Wednesday. $96.61 million exempt, $42.38 taxable. BofA Securities is bookrunner.

In the competitive markets, Palm Springs USD, California is set to sell $118 million of general obligation bonds at noon eastern on Tuesday.