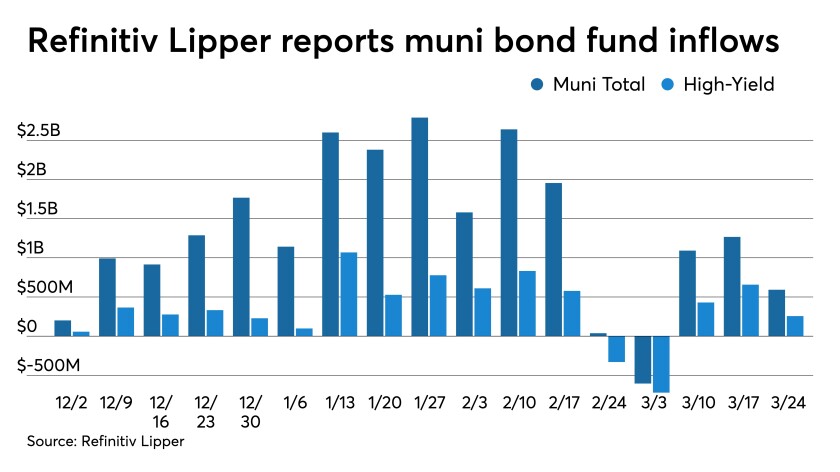 Municipals maintained a mostly steady tone to firmer by some accounts Thursday following the midday rise in U.S. Treasuries, but primary deals got done with some repricing to lower yields.

Triple-A benchmarks were steady to firmer. Refinitiv MMD and ICE Data Services were unchanged top to bottom, while Bloomberg BVAL and IHS Markit showed some bumps in scales.

At the same time, the municipal market still remains expensive to Treasuries, which is keeping some investors on the sidelines, according to the underwriter.

“By the numbers it’s supposedly weaker, but I am seeing [munis] stronger across the board,” a New York portfolio manager said.

He cited such heavy demand that the over $10 billion on the primary market calendar expected this week is still not enough to keep up with demand.

“Anything in 2021 or 2022 may last a whole two seconds in the market before it’s gone,” he said. As a result of the strong demand, the yields on both tax-exempt and taxable municipal bonds are “getting pretty close,” the portfolio manager said.

“I think the talk about tax increases is going to really impact the market and the government state money is like a wrapper on everything,” he said.

The deal saw refunding savings on a present value basis of nearly $247 million, or 17.1% of the refunded par amount.

The issue was comprised of $1 billion of tax-exempt fixed-rate bonds priced by Ramirez & Co. and $228 million of taxable fixed-rates sold competitively.

During the exempt retail order period, TFA said it received $593 million of orders, of which $564 million was usable. The institutional order period saw about $2.1 billion of priority orders, representing 4.7 times the bonds offered for sale.

The four-week moving average remained positive at $586.750 million, after being in the green at $448.069 million in the previous week.

Economy
Initial jobless claims fell to the lowest point since the pandemic began, while gross domestic product growth improved 0.2 percentage points from the previous estimates, both positive for the economy.

Jobless claims dropped to 684,000 on a seasonally adjusted annual basis in the week ended March 20 from a revised 781,000 a week earlier, the Labor Department reported Thursday.

“For the first time since the pandemic began, new claims for jobless benefits have dropped below the 700,000 level and this is likely a sign of even better things to come for the nation’s battered economy,” said Mark Hamrick, senior economic analyst at Bankrate. “More substantial improvement could be seen as soon as the forthcoming release of the March employment data, with a pickup in hiring amid the reopening of the economy and more people being vaccinated.”

Daniel Zhao, senior economist and lead data scientist at Glassdoor said claims are trending in the “right direction” but he warned about expecting a quick rebound. “The fact that we are only now nearing a historical peak is a reminder that it’s going to take a long time to dig out of the hole that the crisis put us in,” he said. It “is a grim milestone to hit almost exactly one year into the crisis.”

Continued claims decreased to 3.870 million in the week ended March 13 from an upwardly revised 4.134 million a week earlier, initially reported as 4.124 million.

Real gross domestic product rose 4.3% in the fourth quarter of 2020, according to the third estimate released by the Commerce Department on Thursday.

The advance and preliminary estimates had shown a 4.1% gain. In the third quarter, GDP jumped 33.4%.

Economists had anticipated a 4.1% increase.

“The upward revision to first-quarter GDP centered mainly on inventories and that’s often considered a negative, because the increase isn’t the result of a true strengthening of demand,” according to Gary Schlossberg, global strategist, Wells Fargo Investment Institute. “However, supply chain disruptions are front and center now, so any increase in stocks of inputs and finished goods should be viewed as a positive in lubricating manufacturing growth and preventing the kind of severe disruptions now affecting the auto industry.”

The price index for gross domestic purchases gained 1.7% in the fourth quarter, after a 3.3% climb in the third quarter of 2020.

This index is the Fed’s preferred measure of inflation.

“As for inflation, its slight downward revision as measured by the GDP deflator (the economy’s broadest price gauge) simply points up the fact that inflation continues to run well below the Fed’s target rate,” Schlossberg said. “Significantly, the consumer price component of that deflator was revised down to 1.5% from an earlier reported 1.6%, well below the Fed’s 2% target rate. That’s likely to change with accelerating consumer-price inflation over the course of the year as growth accelerates and pushes the economy back toward full capacity.”

Also, manufacturing activity in the Kansas City region “grew solidly” in the month of March, along with “positive expectations” for forward-looking activity.

“Regional factories continued to report solid growth in March,” said Chad Wilkerson, vice president and economist at the Federal Reserve Bank of Kansas City. “Materials prices remain extremely high for most firms. However, many manufacturers have been able to pass through at least a portion of the price increases on to customers.”

Chip Barnett and Lynne Funk contributed to this report.