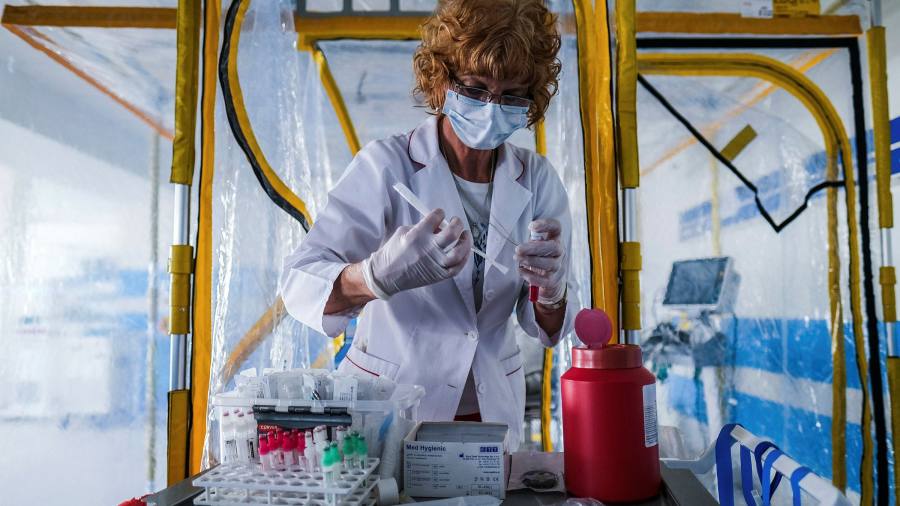 European governments have warned that their hospitals are at risk of being overwhelmed by Covid-19 cases as leaders struggle to get a grip on the pandemic after a week of ill-conceived lockdown measures and recriminations over the EU’s slow vaccine rollout.

German health authorities on Friday warned that the third wave of coronavirus infections could be the worst, pushing intensive care units to “breaking point”.

Lothar Wieler, head of the Robert Koch Institute, the government agency leading the fight against the pandemic, said stopping the wave was impossible but he called on people to reduce contacts to prevent spiralling infection rates.

“The forecasting shows that if the measures are as they are now, the [new case] numbers could reach 100,000 per day . . . if this situation is not contained,” he warned.

Health minister Jens Spahn said that the situation, if unchecked, would put hospitals under severe strain. “If this continues unabated, we run the risk of our healthcare system reaching its breaking point during the month of April,” he said.

Poland’s prime minister Mateusz Morawiecki said his country’s hospitals were caring for more Covid-19 patients than at any time in the pandemic and were “a step” away from being unable to treat people properly. The health ministry said on Friday that there had been 35,143 new infections in the previous 24 hours in Poland as well as 443 deaths.

Intensive care units in France are treating more than 4,700 people with Covid-19, the highest number so far this year and close to the peak of the second wave in November. France on Friday reported nearly 42,000 people tested positive for the virus with a further 897 deaths. Some 7.2m people have now received their first vaccination.

European governments are struggling to contain a surge in new infections driven by the spread of the more transmissible and deadly B.1.1.7 strain, with the public increasingly fed up with coronavirus restrictions and a slow vaccine rollout.

German chancellor Angela Merkel this week abandoned a draconian lockdown planned for the Easter weekend following a public backlash, issuing a rare apology. Emmanuel Macron was criticised for refusing to take the blame for a surge in infections despite this year rebuffing scientific advisers who said another strict lockdown was essential.

With the pandemic threatening to run out of control, EU leaders have lashed out at AstraZeneca for holding up their vaccination campaigns after failing to deliver promised doses. They spent much of a video summit on Thursday night arguing among themselves on how to share out an advanced delivery of 10m BioNTech/Pfizer jabs.

EU leaders also gave their tentative backing to tougher restrictions on vaccine exports after the European Commission reported that 77m doses in total had been exported outside the bloc while 88m doses were delivered to its members. Some 21m doses were sent to the UK, EU officials said. EU capitals are furious that no vaccines have come from the UK in return.

Italian prime minister Mario Draghi on Friday accused drug companies of selling more vaccines than they could supply. “The impression is that some companies — I won’t name any names — sold things two or three times,” he said.

Hopes increased on Friday that AstraZeneca may be able to make up some of the delivery shortfalls after a contractor in the Netherlands was given the go-ahead by the European Medicines Agency to begin supplying its jabs to the EU.

The plant run by Halix has so far been unable to supply the EU with a single dose of AstraZeneca’s Covid-19 jab, despite being named as a production site in an agreement between the pharma company and the European Commission in August.

Nordstrom shares surge as investor Ryan Cohen takes stake: report
Small Account Options Strategy with a Big Return on Investment
Abortion Pills Will Be the Next Battle in the 2024 Election
Bitcoin clings to $23.5K as trader says BTC ‘identical’ to 2020 breakout
Here’s How Much A $1,000 Investment In Tesla Stock Will Be Worth In 2030 If Ron Baron’s Price Target Hits