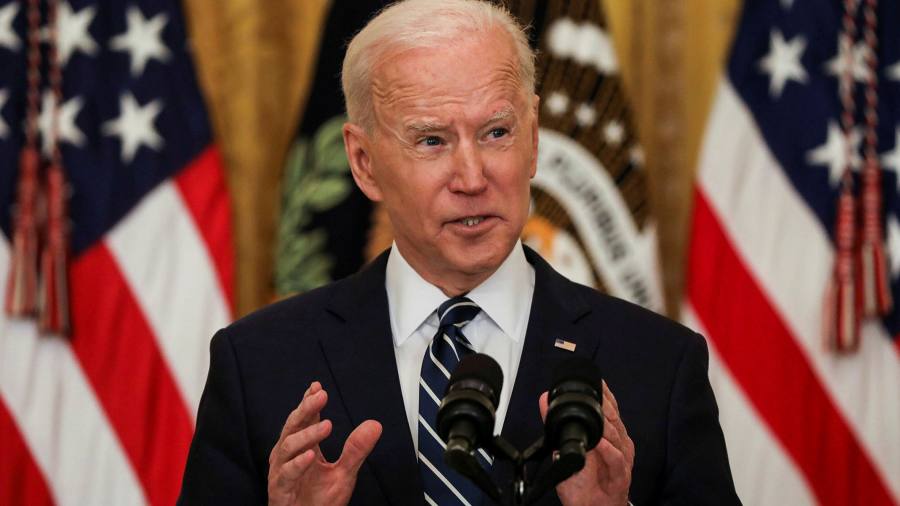 US president Joe Biden declared “hope is on the way” as he doubled his goal for coronavirus vaccinations to 200m within his first 100 days in office and trumpeted his $1.9tn fiscal stimulus deal for already delivering a stronger recovery.

Biden’s optimism in the fight against the coronavirus and the economic downturn came on Thursday during his first press conference since entering the White House in January.

The president noted that economic forecasters were already upgrading their projections for gross domestic product growth to more than 6 per cent. He said that was evidence that the relief package was working and the battle against Covid-19 was making progress.

“We’re starting to see new signs of hope in our economy,” Biden said at the start of the White House press conference. “Help is here and hope is on the way.”

Despite Biden’s desire to project confidence on the health and economic crises that have dominated his first months in office, the US president has found himself on the defensive because of a rise in migrants arriving at the southern border with Mexico in recent weeks.

Biden was repeatedly pressed on his administration’s handling of the surge in new arrivals, including unaccompanied minors. He responded that his predecessor Donald Trump had damaged the US government’s capacity to handle migrants and that much of the pressure at the border was seasonal.

“There’s no easy answer,” he acknowledged.

Biden’s press conference was held as he continues to post relatively strong approval ratings given the deeply polarised US political landscape.

According to the latest poll average by Realclearpolitics.com, 53.3 per cent of Americans approve of his job as president, and 42.3 per cent disapprove. That 11 percentage point edge is better than Trump’s ratings at any time during his presidency, but worse than Barack Obama’s margin in late March 2009, little more than two months after he took office.

Earlier this month, Biden scored his biggest legislative victory when Congress approved his $1.9tn fiscal stimulus plan, which he hopes will help the US economy rebound from the doldrums of the pandemic.

But the president and his economic team are also planning to propose a new investment plan with an additional $3tn in long-term spending on areas such as infrastructure, education and caregiving — to be at least partly financed by tax increases.

“I want to change the paradigm [so] we reward work not just wealth,” he said.

Biden also has been under pressure from progressive Democrats to give a signal that he would support an elimination of the so-called filibuster rules in the US Senate that require a 60-vote majority to advance legislation in the upper chamber.

Such a move would allow Biden and congressional Democrats to move ahead with their sweeping agenda without Republican support — not only on his economic proposals but also on legislation to boost voting rights and possibly even on gun control in the wake of mass shootings in Georgia and Colorado this month.

Biden on Thursday gave his strongest signal yet that he would give a green light to a change in the rules if Republicans kept opposing his proposals.

“I want to get things done, consistent with what we promised the American people,” Biden said.

Delivery services see holiday hiring boom while retailers cautious
Disney executives staged revolt against ousted chief Chapek
All of N.J.s adult legal weed stores are run by big corporations. That has to change, many say.
The prison the judge is recommending for fraudster Elizabeth Holmes
Trump Lawyer Gets Roasted By Appeals Court Over Special Master Appointment: ‘What Are We Doing Here?’