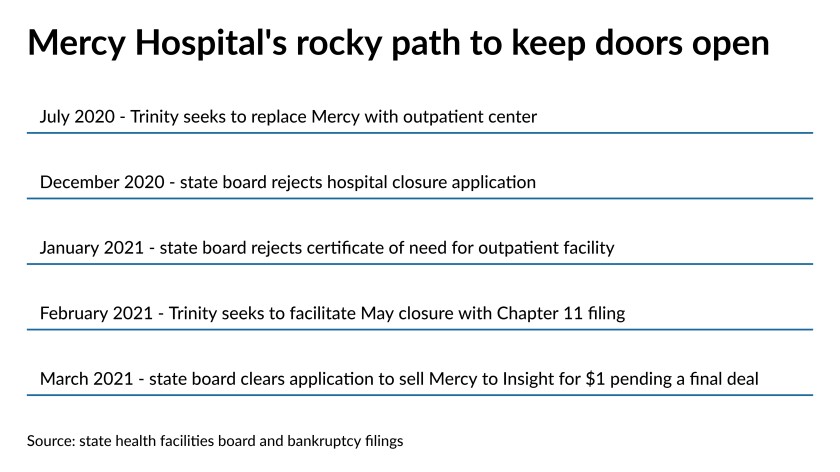 Trinity Health’s proposed sale of Mercy Hospital and Medical Center for $1 would pave the way for the fiscally troubled safety net hospital just south of Chicago’s downtown to exit Chapter 11 and remain open if the deal is finalized.

The Illinois Health Facilities & Services Review Board which holds sway over hospital closures, ownership changes, and construction projects this week signed off on the transfer of the facility to Insight Chicago for $1. The firm is affiliated with Michigan-based Insight, a biomedical technology company. The deal must still be finalized.

Insight would retain some employees and Trinity would fund a $25 million severance package and make whole all unsecured creditors.

From a credit perspective, Trinity’s shedding of Mercy is viewed as beneficial to its balance sheet given the drain posed by operating losses and the need for a capital infusion. But pushback from local officials also posed reputational risks, S&P Global Ratings warned in a bulletin after the bankruptcy filing.

Reputational risk will ease if the facility stays open. “There’s been a lot of focus in the community to keep it open,” S&P analyst Suzie Desai said Tuesday.

Between 80% and 90% of the population served by Mercy are economically challenged, underserved, underprivileged, and uninsured, the hospital has said. Mayor Lori Lightfoot, Gov. J.B. Pritzker and other local officials all slammed the potential shuttering earlier this year.

Mercy lost $303 million over the last seven years, according to Trinity’s January bond offering statement. The hospital recorded a $36.4 million loss for fiscal 2019 but ended fiscal 2020 with a positive position of $4.1 million due to an infusion of federal CARES Act aid.

Losses incurred at Mercy for the first six months of fiscal year 2021 totaled $30.2 million and averaged $5 million per month. The facility also has capital needs.

Trinity Health Credit Group carries a AA-minus rating from S&P and Fitch Ratings and an Aa3 from Moody’s Investors Service.

Mercy is not a member of the Trinity credit group and does not carry a designated affiliate designation that contributes to repayment of Trinity’s rated bonds. Mercy accounted for a small portion of the system’s total operating revenue and assets at 1.5% and 0.32%, respectively, for fiscal year 2020, S&P said in the bulletin.

Trinity had said it would record restructuring charges estimated between $90 million to $115 million as a result of the bankruptcy filing and hospital’s closure. It has more than $8 billion of bond debt. It was not clear how the potential sale would alter those figures.

Mercy has $76.4 million of outstanding long-term debt including $48.9 million under two mortgage loans from the U.S. Department of Housing and Urban Development with the remaining liability an intercompany loan from Trinity. Trinity Health guarantees the HUD loan has said it would continue making payments.

Mercy became part of the national system nearly a decade ago. Trinity is also owner of Loyola Medicine in the Chicago suburbs.

Trinity is one of the largest U.S. non-profit systems, owning or managing 92 hospitals in 22 states with total operating revenues of $18.8 billion for fiscal 2020.

When founded by the Sisters of Mercy in 1852 in a rooming house, Mercy became the city’s first chartered hospital. When Trinity acquired the hospital in 2012 it was junk-rated due to years of losses. Trinity pledged to invest $150 million in capital.