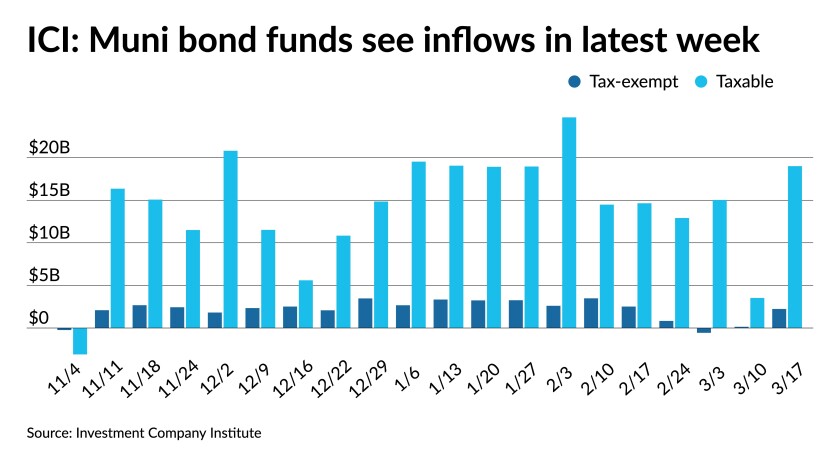 Municipals were firmer across the curve as the New York City Transitional Finance Authority repriced its $1 billion deal to double-digit lower yields and the primary and stronger U.S. Treasuries again helped to direct secondary markets stronger.

The Investment Company Institute Wednesday reported another week of inflows with $2.234 billion coming into long-term municipal bond mutual funds, after $1.405 billion the previous week, adding to the strong fundamentals in munis. ICI also reported $190 million of inflows into exchange-traded funds for the week ending March 17. In the previous week, ETFs saw inflows of $310 million.

A year ago as the municipal market was rampaged by the onslaught of the COVID-19 pandemic, the 10-year traded off 200 basis points (more in some sectors of the market) over a 10-day period and fund outflows marked $45 billion of losses in a two-week period.

“Since that time, there have been only five weeks with negative flows for a holder category that ended 2020 with nearly $900 billion par value (23% of all muni holdings),” noted Kim Olsan, senior vice president at FHN Financial. Flows so far this year reported by ICI total more than $25 billion.

Looking at yields, the 10-year triple-A traded as low as 0.79% on March 9 and by March 23 hit 2.79%, according to Refinitiv and 2.87% on Bloomberg BVAL. The muni/UST ratio surged to almost 350% at that point and prompted daily par volume of over $9 billion or almost twice the current total, Olsan said.

“Dramatic improvements in all these metrics points to a constructive outlook. The 10-year AAA/UST ratio is currently at 68%, near an all-time low and well through its annual average of 116% as buyers remain engaged,” she said. “The market tone should be firm (with occasional pullbacks) as more sectors come off negative outlooks and state and local credit profiles improve.”

Powell, Yellen, durable goods
The future unemployment levels in the Federal Reserve’s Summary of Economic Projections were not lowered as much as would be suggested by the panel’s expectations for economic growth, according to Federal Reserve Board Chair Jerome Powell, because they expect the participation rate to rebound, which would lift the unemployment rate.

Getting people back to the labor force is “highly desirable,” he told the Senate Committee on Banking, Housing and Urban Affairs on Wednesday, although it would curb progress in the unemployment rate.

The expanded labor force “is crucial, as we are coming back up from the biggest drop in unemployment since World War II,” Powell said.

The chair’s testimony and responses were “consistent,” noted Bruce Monrad, chairman and portfolio manager of Northeast Investors Trust, and “there wasn’t much” for markets to digest.

“He stayed the course on the benefits to the economy of running a little ‘hot,’ the hedged response on whether there were asset bubbles, etc.,” he said.

Treasury Secretary Janet Yellen would not give a timeframe for when guidance for states and localities will be released on the uses of the $350 billion of stimulus funds. The department has 60 days to provide rules. Yellen would not commit to getting the rules out in a shorter time.

While the SEP estimates 6.5% GDP growth this year, Powell noted, “There are risks to the upside and to the downside but we should see a strong year.”

And while Powell said the Federal Open Market Committee is “taking inflation seriously,” he still believes any increases in the near-term will be short-lived.

“In the near term, there will be some upward pressure on prices and there is also a technical matter, where the low readings from April and March drop out of the 12-month calculation but any upward pressure and higher inflation would be transitory.”

While inflation will grow “as we move through 2021,” he said, “we don’t expect it to gather steam and snowball inexorably.”

Powell addressed the 10-year Treasury yield’s ascent to levels not seen in a year. “I think what you have seen is the Treasury market responding to vaccine news,” he said. “As vaccine doses go up and confirmed cases go down, you see yields rise, it is only natural.”

“Over the last week the Fed has said nothing that would corral the rise in long-term rates, yet the bond market appears to have settled down,” said Greg McBride, senior vice president and chief financial analyst at Bankrate. “So if Powell wasn’t going to, and doesn’t have to, say anything to influence action on the long end of the yield curve, he’s not going to deviate from the script anywhere else.”

Scott Ruesterholz, portfolio manager at Insight Investment said there are “so many moving variables” that allow the economy to “tolerate higher long-term interest rates.

“This is why the timing and nature of rates moves are critical in gauging potential Fed reaction functions, as a faster improvement in the labor market or a more sustained rise in inflation can lead to higher yields or inflation expectations, which the Fed can be comfortable with.”

In data released, durable goods unexpectedly fell 1.1% in February after rising a revised 3.5% in January, first reported as a 3.4% jump, while excluding transportation, orders dropped 0.9% after a 1.6% gain in January.

Core capital goods, a harbinger of business investment plans, was 0.8% lower in February after a 0.6% climb the month before.

“The durable goods data will likely be a one-off miss that does not disrupt the upbeat outlook for manufacturing the sector,” according to Ed Moya, senior market analyst at OANDA. He said investors blamed “the deep freeze that pummeled the South.”

“The headline miss was substantial,” said Steve Sosnick chief strategist at Interactive Brokers. “One might expect that a miss of that magnitude would have a huge effect on bonds and stock futures, but the response was modest.”

Since “one month does not tell a full story,” and orders can be “volatile” and are generally revised the following month, the surprising decline was written off by traders, he suggested.

Plus, the decline can be partly attributed to “supply chain disruptions and weather,” Sosnick said. While both can be classified “temporary,” he added, the supply chain issues have persisted “much longer than a true temporary factor.”

If the supply chain will make it difficult to determine when goods will be delivered he said, “It is not unreasonable to think that managers might delay orders.”

And while the Midwest and Texas suffered storms last month, Sosnick added, “weather is always a convenient excuse,” even if “I don’t know how much of the shortfall we can attribute to the awful weather.”

The decline could have been larger, they said, had it not been “a rebound in aircraft orders.” While “supply chain problems are getting worse,” especially for manufacturers, Quinlan and House said, “nothing in today’s report is enough to derail what we expect to be a strong rebound in business spending this year.”