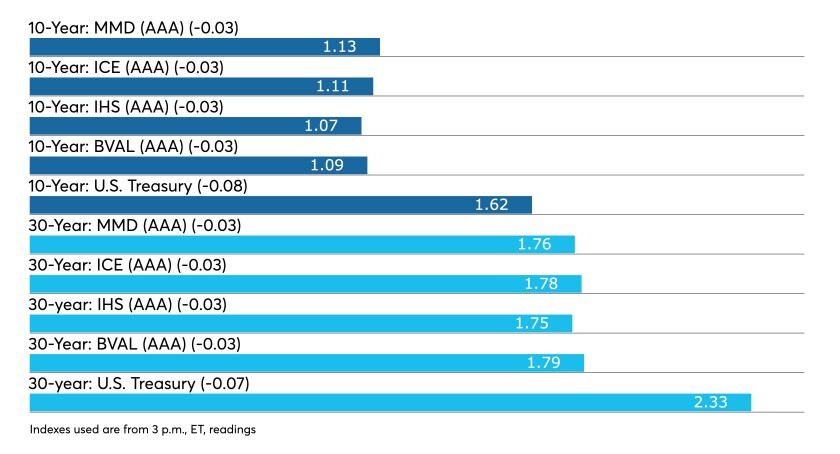 Triple-A benchmark yields were stronger across yield curves while ratios rose slightly. Municipal to UST ratios were at 69% in 10-years and 75% in 30, according to Refinitiv MMD, while ICE Data Services showed ratios at 68% in 10 years and 77% in 30. Treasuries made further gains as the day wore on as equities lost ground after Federal Reserve Chairman Jerome Powell and Treasury Secretary Janet Yellen testified before Congress.

Powell repeated his belief that inflation will remain contained, while Yellen said rules would soon be out for state and local governments on how they can use relief funds.

The deal priced just a day after Moody’s Investors Service changed its outlook for the higher education sector to stable from negative as “U.S. universities and colleges are looking at improving revenue prospects over the next 12-18 months, driven by a rising number of colleges pledging to have students return to campus in greater numbers in fall 2021, stronger investment returns, a funding boost from additional federal aid via the American Rescue Plan, and a steadier outlook for state funding.”

“The Moody’s news was a positive for the sector, but Princeton is gilt-edged and a well-sought-after credit, so those yields are not surprising,” a New York trader said. “But I do think it sends a signal that marquee names will push benchmarks, showing how much investors will give up in yield for high-quality credits.”

J.P. Morgan Securities LLC priced $510 million of senior lien revenue bonds, Series 2021B for the Central Texas Regional Mobility Authority. and was 20 times oversubscribed with $10 billion of orders, according to advisor Hilltop Securities.

The strong demand for higher-yielding paper continues, according to John Mousseau, chief executive officer at Cumberland Advisors in Sarasota, Florida. “There is plenty of demand for bonds,” he said Tuesday, noting that higher-yielding bonds are seeing “huge demand” with new deals in general being 10 and 20 times oversubscribed. “It’s just ongoing prospecting for yield.”

How the New York City Transitional Finance Authority’s $1.01 billion future tax-secured subordinate bonds are priced for institutions may tell how investors see the strength holding up.

Economy
Regional service sector surveys released Tuesday showed improvement, which feeds into the belief that inflation will rise in the near term.

The Federal Reserve Bank of Philadelphia’s nonmanufacturing index suggested expansion, as the general business conditions index jumped to 38.6 in March from 3.9 in February, while at the firm level, the index soared to 33.5 from 7.5.

The number of full-time employees index grew to 9.0 from 2.8.

The Federal Reserve Bank of Richmond’s service sector survey showed big gains in revenues (to positive 16 from negative 6), demand (25 from 18) and local business conditions (27 from 3) in March, while the number of employees index was steady and price indexes soared, paid to 4.73 from 3.10 and received to 2.61 from 1.26. The survey noted that respondents see prices paid continuing to outstrip prices received in the future.

The Richmond Fed’s manufacturing index was also showed improvement in March, with the manufacturing index rising to 17 from 14, shipments increasing to 22 from 12 and new orders and number of employees steady. The price indexes soared, prices paid to 6.15 from 4.17 and received to 3.52 from 2.83. According to the survey, respondents expect the differences in the two indexes to “narrow in the near future.”

Although the markets are yet to get on board with the Federal Reserve’s position that inflation gains will be transitory, “the inflation story is not so simple,” said Anwiti Bahuguna, head of multi-asset strategy at Columbia Threadneedle Investments, “partly because the Federal Reserve has been clear that its reaction to inflationary pressures will be different this time.”

And with lockdowns easing and ending, the nation is primed “for a period of high growth,” causing “inflation hawks have begun sounding alarms,” she said, noting the potential for higher inflation “is something to take seriously.”

A year after the lockdowns began, causing the economy to tank, year-over-year numbers will be skewed by the low numbers last year.

And while stimulus and growth will “certainly” create inflationary pressures,” Bahuguna said, “we don’t think it will be enough to push inflation above the Fed’s comfort level on a sustained basis, and the Fed’s new paradigm for responding to inflation is a critical piece of the puzzle.”

The Fed, for its part, shifted to an inflation averaging method, which will allow the economy to run hot for a time to make up for past misses.

While the Philadelphia report numbers suggest a “short-term inflation bump,” according to Dave Wagner, portfolio manager and analyst at Aptus Capital Advisors, he sees them as “transitory.” But in general, the report was on target with expectations, “showing that optimism surrounding the vaccine and re-opening continues to strengthen.”

But it was the employment numbers that “surprised” him the most. “I think one of the most overlooked items with employment is that people will have a higher propensity to spend, but, most importantly, one of the biggest drivers of inflation is actual wage growth.”

The report’s wages and benefits costs rose to 26.6 from 21.7 in the month. While wages have grown, “it’s driven by a smaller portion of the workforce.”

Elsewhere, new homes sales plummeted 18.2% to a seasonally adjusted 775,000 level in February, from an upwardly revised January pace of 948,000 million, first reported as 923,000, the Commerce Department said on Tuesday.

Economists polled by IFR Markets expected 876,000 sales in the month.

But the decline isn’t “a warning sign of what is to come,” said Ralph McLaughlin, chief economic advisor at Kukun. “One month does not make a trend, and often these month-to-month assessments can be very volatile.”

After being a star of the economy during the pandemic, this report could signal “the housing market is returning to some normality.”

A shortness of inventory and rising prices have not helped sales levels, he said. Incomes, he said, are not rising at the same pace as home prices. “At some point you will tap out the potential buyers for homes,” McLaughlin said, but not yet.

Bad weather and a short month hit the sales figures, said Colin McBurnette, senior portfolio manager for Angel Oak Capital Advisors. “Supply is constraining, but the number this month does not concern us,” he said. “There are strong, systemic tailwinds at play that will benefit the housing market for a long time. We see long, sustainable growth ahead.”

Also released Tuesday, the U.S. current account deficit grew to $188.5 billion in the last quarter of 2020 from $180.92 billion, according to the Commerce Department.

Aaron Weitzman and Christine Albano contributed to this report.

What we learned about the US economy this past week
House GOP struggles to unify over budget ideas
Stocks making the biggest moves after hours: Chipotle, Enphase Energy, Fortinet and more
Government Keeps Meddling With Private Company Decisions
Fantom’s 5-week winning streak is in danger — Will FTM price lose 35%?