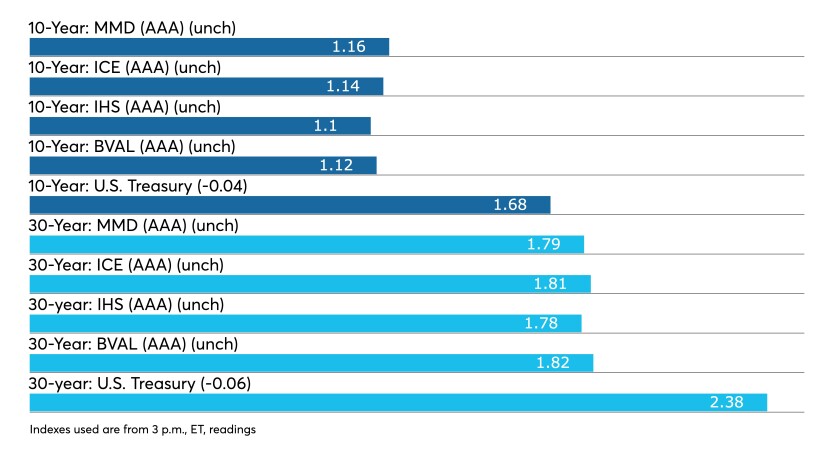 Triple-A benchmark yields were stronger on the short end with two basis point bumps to scales on bonds inside 2027, while ratios held to recent levels. Municipal to UST ratios were at 67% in 10-years and 75% in 30, according to Refinitiv MMD, while ICE Data Services showed ratios at 67% in 10 years and 76% in 30.

Trading was sparse in the secondary, though gains were made on the short end, as investors await the week’s calendar.

“In secondary, they don’t like to buy until it calms down or turns around and that’s what’s happening today,” a New York trader said. “We have gone through the recent supply and it’s been well-received” on a new-issue basis. “For new issues, investors will buy the deals even if the Treasury market is getting weaker.”

The firmness in the 10-year Treasury benchmark put the yield at 1.67%, below last week’s highs when it reached above 1.73%, which was a confidence booster for investors, he noted.

“That reassures them and calms them down especially with the bump in yields,” he said.

Although the ratios to Treasuries are “not that great,” according to the trader, he said the enormous supply — especially in New York — the last two weeks has fed the voracious appetite among the buy side.

“I can’t remember the last deal where we saw balances,” the trader said, noting that a small $250 million balance after the DASNY deal was quickly snapped up by one dealer.

Municipals continue to be in demand as suggested by the recent positive fund flows, and valuations that have been fairly resilient in the sell-off as they play catch-up with higher yields the past two sessions, noted Karel Citroen, head of municipal research, global investment management firm Conning.

Refinitiv Lipper reported $1.276 billion of tax-exempt municipal bond mutual fund inflows for the week ending March 17, after $1.092 billion of inflows the week prior.

Taxable demand remains strong, according to Citroen, who pointed to the roughly $16 billion of orders for the $1.2 billion Illinois deal, which was oversubscribed top to bottom last week.

On the other hand, dealer inventories are light and there is limited secondary activity, he noted.

Looking ahead, under Congress and the Biden administration’s support for higher corporate tax rates, Citroen believes municipal bonds may regain the “luster and appeal” they lost after being a victim of the Tax Cut and Jobs Act back in 2017.

“The latest rescue act will have a significant positive impact on the municipal market,” Citroen said, noting that every state will receive $500 million and will get anywhere from 10% to 30% of their fiscal 2020 operating budgets.

The New York trader agreed the stimulus package will be of great assistance to local governments — especially large states like New York, New Jersey, and California.

“It will be very helpful for states and school districts, and give investors less concern about credit quality and other negative credit issues,” the New York trader said.

Citroen believes the aid will prevent budget cuts and stabilizes finances for the remainder of fiscal 2021 and into fiscal 2022.

This will be a positive for property and casualty insurers who traditionally allocated a meaningful portion of their portfolios to tax-exempts given their attractive yields with higher credit ratings, he said.

Economy
Monday’s economic data suggested weakness, with existing home sales declining for the first time in four months and the Federal Reserve Bank of Chicago’s National Activity Index slipping into negative territory, but one economist said these numbers don’t reflect “economic slowing” or even a “lack of demand.”

The National Association of Realtors said existing home sales declined 6.6% in February to a seasonally adjusted annual rate of 6.22 million from an upwardly revised 6.66 million a month earlier, first reported as 6.61 million. Economists surveyed by IFR Markets had expected sales at a 6.49 million pace.

“The lower [monthly] number doesn’t indicate economic slowing or a lack of demand, it was quite the opposite,” said Karissa McDonough, senior vice president and chief fixed income strategist at People’s United Advisors. “Supply continues to be constrained, meaning that a big contributor to the drop was simply that there weren’t enough available homes on the market for all the interested buyers.”

Looking beyond the headline, she said, including time on market and sales of higher-end homes suggests “in areas with less of a supply/demand imbalance, activity remains brisk. Generally speaking the economic rebound remains strong which is what becomes clear once we take a closer look at the dynamics underlying the data points.”

Housing has been a bright spot during the pandemic, but has slowed a bit recently.

“A significant part of the slowdown reflects supply disruptions – a lot of demand for either new or existing homes is met through new supply,” McDonough said. “Since there is so much demand for building materials for new homes and those supply chains are a bit disrupted, that lack of new home availability is spilling over and reducing availability in existing home supply as well.”

The recent drop-off is related to supply, not demand, she said.

“The 15.8% surge in home prices over the past year has raised concerns that the housing market is on the verge of another bubble,” according to Mark Vitner, senior economist at Wells Fargo Securities, LLC. “While that always remains a possibility at some point in the future, home prices appear to have been pulled higher this past year due to the imbalance of the supply and demand of existing homes rather than an increase in speculation.”

While price gains “will slow,” Shannon Brobst, economist at Moody’s Analytics said she doesn’t expect “a large house price correction,” in part due to low mortgage rates and depressed inventory.

“As fiscal stimulus wears off and mortgage rates rise, demand will cool over the coming quarters, alleviating some of the upward price pressures,” said Brobst. “Affordability will weigh on demand,” specifically for the more expensive homes.

Once the foreclosure moratorium ends in June, she said, supply will rise.

“With more COVID-19 vaccinations being distributed and available to larger shares of the population, the nation is on the cusp of returning to a sense of normalcy,” said NAR Chief Economist Lawrence Yun said. “Many Americans have been saving money and there’s a strong possibility that once the country fully reopens, those reserves will be unleashed.”

Elsewhere, the Federal Reserve Bank of Chicago’s National Activity Index dropped to negative 1.09 in February from positive 0.75 in January.

Half of the four categories were negative in February, and all declined from the prior month.

Sales, orders and inventories along with employment, unemployment and hours were the positive contributors, while production-related and personal consumption and housing were negative.