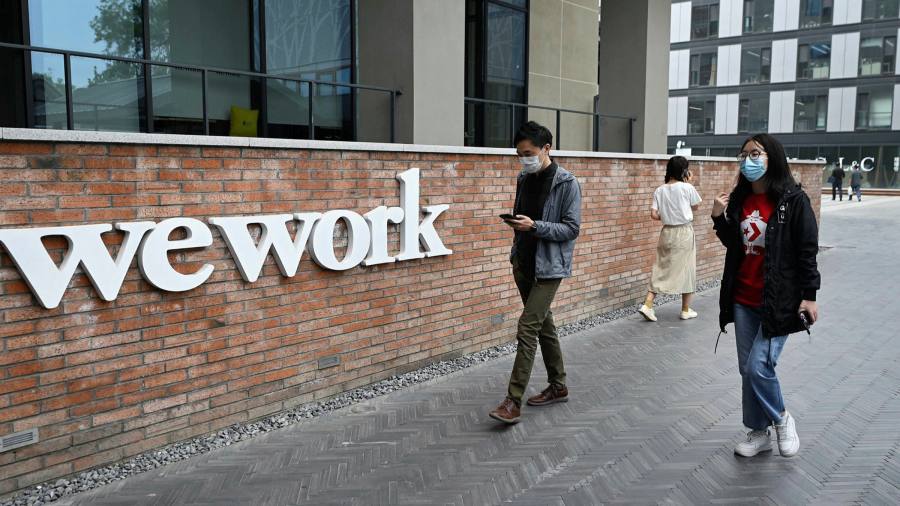 WeWork lost $3.2bn last year as Covid-19 shut its co-working spaces around the world, the office provider has revealed in a pitch for $1bn in new investment and a stock market listing.

Documents shown to prospective investors described losses that narrowed from $3.5bn in 2019, as WeWork slashed capital expenditure from $2.2bn in 2019 to just $49m.

The documents, which have been reviewed by the Financial Times, also show that occupancy rates across its global portfolio fell to 47 per cent at the end of 2020, down from 72 per cent at the start of the year, before the pandemic hit.

The “Project Windmill” documents show that WeWork is aiming to go public at a valuation of $9bn including debt, through a merger with a special purpose acquisition company, or Spac.

WeWork is in discussions with BowX Acquisition Corp, a “blank cheque” company which raised $420m in August, according to people familiar with the matter and to the documents. BowX counts former basketball star Shaquille O’Neal as an adviser and is run by Vivek Ranadivé, the founder of the California-based software group Tibco.

To make up the rest of the $1bn sought by WeWork, the two sides are aiming to line up institutional investors to secure the deal.

A listing for WeWork, albeit at a much reduced valuation from the one it was chasing in an abortive initial public offering two years ago, will be a marker of how sharply Spacs have changed investor appetite for businesses which once struggled to go public.

WeWork is once again pitching itself to investors not as a conventional bricks and mortar landlord but as a high-tech platform, as it did in 2019. The documents seen by the FT describe the business as a “worldwide property technology platform” and an “asset light platform for managing and orchestrating flexible space”.

Projections in the documents include a fast rebound in occupancy to 90 per cent — well above WeWork’s pre-pandemic level — by the end of 2022 and adjusted earnings before interest, taxes, depreciation and amortisation of $485m next year.

One investor pitched on the WeWork deal cast doubt on the company’s projections, which also forecast that revenues would climb from $3.2bn last year to $7bn by 2024.

Such financial projections are prohibited in traditional IPO documents but WeWork would not be subject to those restrictions under a merger with a Spac.

There is no guarantee that WeWork will end up agreeing to merge with BowX and the company may be holding discussions with other parties about alternative financing.

WeWork’s January 2019 fundraising from SoftBank, its largest backer, placed a $47bn valuation on the lossmaking company, making it one of the most richly valued “unicorns” to have ridden the private capital wave.

But its expectations crashed to earth as it prepared for a planned IPO in the summer of 2019, as investors focused on its lavish spending, record of losses and the erratic behaviour of co-founder Adam Neumann.

SoftBank stepped in with a multibillion-dollar rescue financing after the IPO collapsed in late 2019 to help the company avert bankruptcy, which executives at the time warned was looming. The Japanese investor installed SoftBank executive Marcelo Claure as WeWork executive chair and in February last year it named real estate veteran Sandeep Mathrani as its new chief executive, tasking him with slashing the business’s costs.

A deal with BowX has been made possible in part by last month’s settlement of a legal dispute between SoftBank and WeWork investors, which would have otherwise been front and centre in the office company’s attempt to go public.

Under the settlement, SoftBank agreed to buy $1.5bn of stock from Neumann, earlier WeWork investors including the venture capital firm Benchmark and employees.

The $3.2bn loss in the Project Windmill documents excludes WeWork’s China business, in which the company sold its majority stake in September.

Gilead’s Stock is on Sale: Should You Buy?
Eerily perfect galaxy-shaped spiral appears over Hawaii. What is it?
Should You Follow Buffett & Buy Japan ETFs?
The Biggest Problem with Technical Analysis for Options Traders
The Different Ways “Commission-Free” May Cost You Money