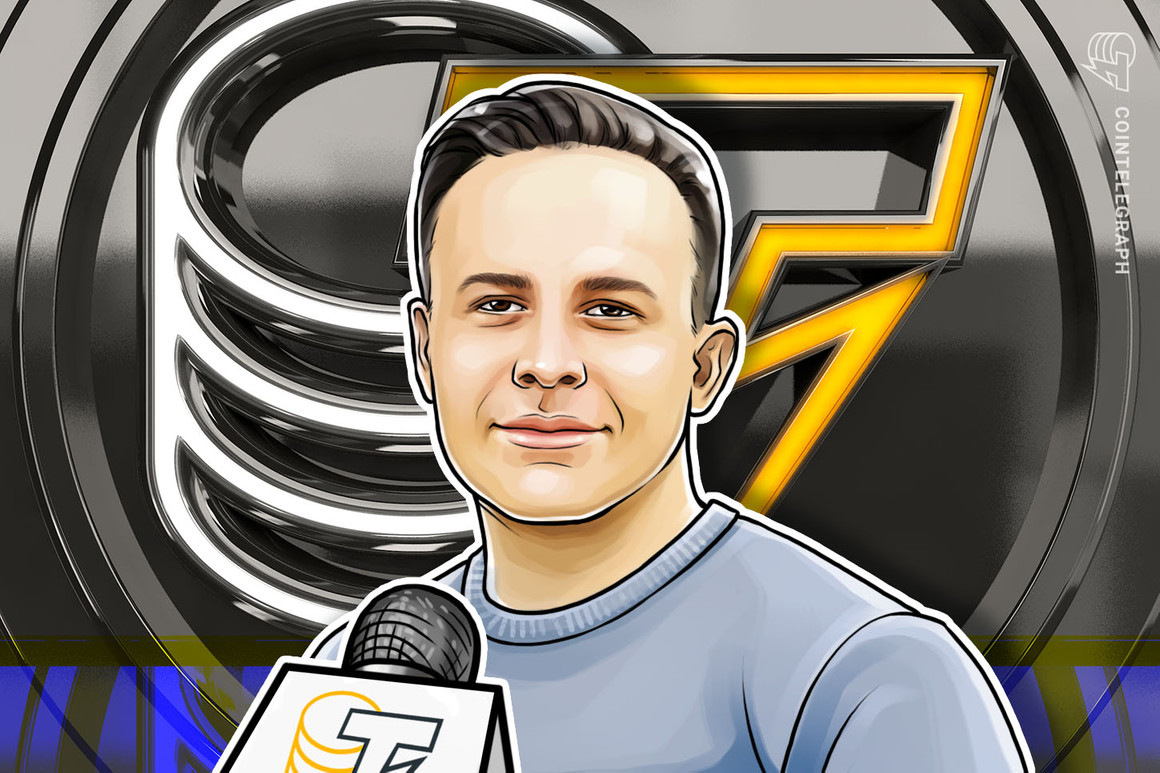 It really doesn’t seem like the decentralized finance sector is planning to slow down its development in 2020. Interest in the sector is still growing despite high Ethereum transaction fees, and the total value locked in the space continues to break all-time highs, recently reaching $51 billion.

1inch is a decentralized exchange, or DEX, aggregator that came onto the DeFi scene in the later part of 2020. The platform’s algorithm searches for the cheapest exchange rates among the DEXes that are integrated into its ecosystem. 1inch also runs the Mooniswap automated market maker.

According to data, January was the biggest month ever for DEXes, and 1inch played a role in achieving that milestone. It currently stands second in terms of the number of traders, behind Uniswap.

To ascertain how 1inch packs such a punch, Cointelegraph spoke with Sergej Kunz, co-founder of the platform. The interview is available on Cointelegraph’s YouTube channel.

How did it all begin?

Cointelegraph: How exactly did you get into crypto, and at what point did you realize that the industry needs a DEX aggregator such as 1inch?

Sergej Kunz: Back to the roots where we started, the initial idea was actually from [1inch co-founder] Anton, who suggested to build it at a hackathon in 2019 — to build one place to list all the different exchanges, and then you can just select one where you can swap for the best price.

But I also had the idea to improve that by splitting into small pieces the amount that we are going to swap and exchanging it on multiple sources at the same time to reduce the price leverage because price impact was the biggest problem in the DeFi space at the time.

“At the hackathon, I spoke with Vitalik Buterin and Hayden Adams from Uniswap, and I shot the idea at both of them. They said, ‘Yeah, do it. It all sounds great.’”

Actually, we built it for us. Anton was swapping all the time. He needed the best rate, and I was playing around with arbitrage bots before that. Somehow, it was really helpful for other people. At the hackathon, we didn’t win any huge prizes, only the small prize: 300 bucks. So, I was able to pay for my tickets for the airplane.

CT: So, how long did it take to put everything together? One worry in the DeFi industry is that protocols get built quickly and then people get burned because of mistakes.

SK: Anton and I, together we have 16 to 17 years of professional experience in software engineering and architecture. Anton had much more experience in cryptocurrency and algorithms. We actually built it over two nights. And one day before I went to sleep, I built most of the front end, the app. Anton wrote the algorithm and the smart contracts, and we put it together and just worked without any sleep over two nights.

“We started in December 2018 in Singapore. We built a project over one night that got some sponsor prizes. So, we had no expectations.”

We just started to build. We have built other things before, and here, we just wanted to solve our own problem. And at the end, we got this huge traction because it has just solved a huge problem in the DeFi space.

In comes the token

On Dec. 24, 2020, the 1inch Foundation deployed and distributed the platform’s native governance and utility token. Overall 90 million INCH tokens were distributed to those who met certain criteria established by the platform.

CT: The project really came to light after you released the 1INCH token. You don’t see the token as an investment vehicle, yet people are still going to be speculating on it, and eventually, some may get burned. Did you consider this aspect?

SK: Yeah, we got a lot of negative feedback from the community — from the people who bought at the beginning on the release day. Actually, the 1inch Foundation issued the token and started the distribution. The idea behind the distribution was to make the token more decentralized.

“We don’t see any financial value behind the token. So, one 1INCH is equal to one 1INCH, nothing else. Actually, we didn’t even start with the tokenomics. The idea of owning the 1INCH token in the first place right now is to participate in the governance.”

So, you have a kind of ticket, and with this ticket, you get access to change some settings in the protocol. Of course, those people can also participate in the discussions on the governance forum, for example, and make suggestions.

Upon the distribution of the tokens, one lucky 1inch user received almost 10 million 1INCH, which came to around 11% of the total supply and was worth around $27 million at the time.

Kunz told Cointelegraph: ”This guy communicated with us. He suggested a lot, gave support and introduced us to other projects. He came to us to help us improve our community, and so on.”

CT: How do Ethereum gas prices affect you currently as a platform? Given the recent news regarding the integration with Near Protocol, will you be looking to diversify further, or do you plan to stay loyal to the Ethereum ecosystem?

SK: So, if you see that people are still swapping, it’s because they have to swap. Some people have loans somewhere, and they have to repay them. Huge gas prices, I would say, are bad for the whole space.

“I have to say that something better than Ethereum can only be Ethereum. We are waiting for Eth2, but for sure, they have to scale.”

We announced a collaboration with Near Protocol because we are friends with them and the Rainbow Bridge allows us to move funds from Ethereum to Near Protocol. We also announced a collaboration with Tron. For sure, a lot of people think it’s a scam and so on, and that it’s a copy of Ethereum. For us, it’s important because people need it and there are people who use it. We also see DEXes there on the platform, and so if you have DEXes, we can aggregate.

On Feb. 25, it was announced that 1inch would roll out on Binance Smart Chain and that the platform would even run a BSC validator node. Both 1inch’s Aggregation Protocol and its Liquidity Protocol will be available.

SK: It’s similar to Ethereum. We are able to deploy the whole 1inch Network to BSC, and you can interact with their bridge and move 1INCH tokens from Ethereum to Binance Smart Chain.

If you move from Ethereum, you lock your tokens in Binance’s bridge on one side, and the same amount is unlocked on BSC. So, this allows us to fulfill the needs of the users. We have gotten a lot of requests from people because there’s a lot of money on Binance Chain.

CT: What are your relationships with other firms in DeFi, like Uniswap? And what’s the latest on your conflict with DeFi Pulse?

SK: About DeFi Pulse: Yes, we had a conflict. We still have a conflict with the founder of DeFi Pulse because they just used our smart contracts without asking. It was copyrighted right from the beginning, even before we started the 1inch protocol. All we wanted was that they just mention us in the source code when they published our pieces of code. And there were some miscommunications with them and some bad jokes also from my side.

But we try to stay friends with most of the projects, or with all the projects. I gave him [Scott Lewis, founder of DeFi Pulse] my hand, you know? I gave my hand and said, “Let’s clear all this,” and they just declined that. That’s fine for me.

But DeFi Pulse, they actually acknowledged our request to get us listed, at least on the test platform, and maybe already on the main one. [DeFi Pulse listed 1inch on Feb. 27] l So yeah, that’s great. But we needed to put pressure, social pressure. That’s why we published this tweet — because we tried first with emails, and only social pressure helps.

“About other projects like Uniswap, I would say we are friends, but we talk like once a year. For sure, they have, from my point of view, a little bit of fear because we introduced our own liquidity protocol.”

It’s much more efficient than Uniswap because we charge a fixed amount of fees. We don’t see them as some kind of competition — we have integrated them, we use them and we send a fair volume to everyone. So, that’s just math.

CT: Let’s discuss the 1inch team. Do they own any of the 1INCH tokens?

SK: If you see our distribution of the token, we have allocated about 22.5% to the team members. They’re locked for one year, and we have them unlocked in seven steps over the next three years. So, in total, we have four years of vesting. Right now, no one on our team — including myself — has any tokens in their pocket. Tokens are right now frozen on the multisig. Of course, everyone on the team gets a specific amount of a share of the tokens, to get the right commitment.

We see it as that they don’t have to work for someone, like for a company. They work for themselves because they have these tokens, and they will give their best over the four years. We have a great performance from the team. Most of them are hackers, and they work by themselves like 12, 14, 16 hours a day sometimes just to deliver a specific feature, like right now we have with the finance matching deployment.

CT: And just zoom out now into the DeFi space in general. What do you think will happen to DeFi in 2021?

SK: I see a huge pain point right now, which is the gas price. It’s not possible to onboard new people right to Ethereum because they’ll have to pay a lot of money. We will see a solution to these problems with layer-two solutions or improving this issue by seeing people moving to other chains like Binance Smart Chain, for example.

“Optimistic rollups are going to be released really soon, from what I understood. For sure, we will participate in this movement, and we are waiting for Eth2. So, we need to move fast.”

Also, the amount of transactions that can be covered by the miners. When we have better throughput and lower gas costs, then we can build much better products with a better user experience.

This interview was edited and shortened for clarity. To see the video interview please visit the Cointelegraph YouTube channel.

Silvergate Capital shares jump after BlackRock reports increased stake in the crypto bank
Small Account Options Strategy with a Big Return on Investment
Stocks making the biggest moves after hours: Snap, Electronic Arts, Advanced Micro Devices and more
Rumor has it that Dogecoin could shift to proof-of-stake — What does that mean for miners?
A Conversation With Designer Katie Kime