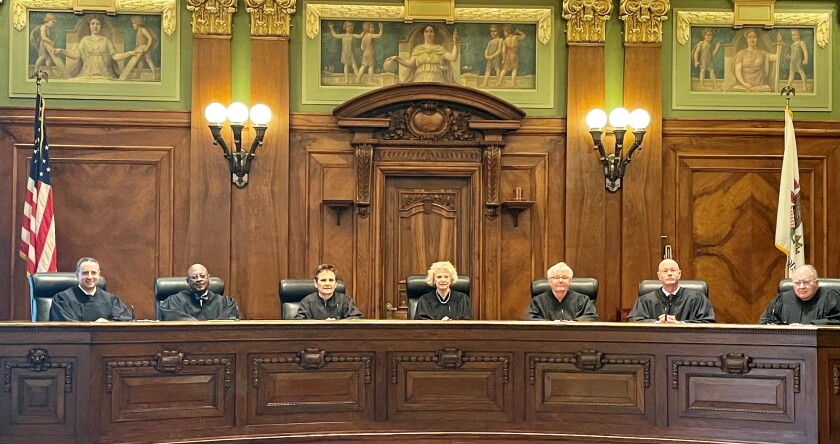 Illinois Supreme Court justices posed questions but offered little indication of how they might be leaning during oral arguments about a lawsuit that seeks to halt repayment of $14.3 billion of Illinois general obligation bonds.

One asks it to clarify the rules that lower courts should apply in deciding whether to allow a taxpayer status action to proceed. In that case the range of outcomes would be from tossing out the case launched in July 2019 by the head of the conservative Illinois Policy Institute to sending it back to the circuit court where it could proceed and its legal merits aired there.

The justices could also go further and settle the more sweeping question about whether the state’s $10 billion pension bond deal in 2003 that paid down liabilities and covered near-term contributions and $6 billion in borrowing from two deals to pay down the state’s overdue bills in 2017 violated the Illinois constitution.

If the court opts to settle the constitutional question, the opinion would have a broad reach that extends to future debt practices.

A question during Tuesday’s arguments from Justice Mary Jane Theis to Tillman’s lawyer, Raoul Cantero III, underscored the weight of the questions before the court.

“Your complaint asks the court to order the state to default on billions of debt. Is that reasonable?” Theis asked.

Cantero told her that it’s the court’s job to make the judgment and if unconstitutional then “the chips have to fall where they may.”

Theis raised a question over the impact on the state’s bond ratings.

“If your complaint is successful and the court orders the state to default on billions of dollars what will happen then?”

Cantero argues that a downgrade is not a forgone conclusion.

“There is no evidence on that and that is one thing that can be litigated” and he suggested a scenario under which the “state’s rating goes up because now it has those additional funds and the law is clarified.”

Theis appeared skeptical: “After the state defaults on $20 billion of bonds?” Cantero responded, correcting the figure as it’s $14.3 billion that remains outstanding from the combined $16 billion of borrowing.

There’s no timetable for an opinion, said court spokesman Christopher Bonjean, adding that three opinions from cases heard in January are being released this week.

The municipal bond market must now await the court’s decision. Its participants are closely following the case and many believe given the state’s legal review process in advance of issuing the debt that the bond issues will pass muster and if voided the state would find a way to make good on the debt.

But there’s also an undertow of doubt that has in the past influenced secondary bond market prices for Illinois debt; nothing is certain where the judicial branch is involved and until the case is resolved the state can’t borrow to pay down bills.

The question over debt rules is “of great significance to the state’s ability to engage in financial operations including the issuance of debt” that extends beyond the $14.3 billion still owed on the deals to future state debt issuances, Richard Huszagh, assistant attorney general, told the justices. “We urge this court to address that issue to resolve this case and bring it to closure in the interest of justice and the public interest.”

The court decides either now or later, Huszagh said suggesting that if the taxpayer action is allowed to proceed it would eventually make its way back to the high court because the debt question “is one that ultimately can only be decided by this court which is the final arbiter of the meaning of the Illinois constitution.”

Cantero countered that it’s too early for such a decision as the constitutional questions haven’t yet been litigated and the Supreme Court should narrowly rule on questions that govern taxpayer lawsuits and decide only whether the case can go back to the circuit court level to proceed.

“These issues haven’t been thoroughly vetted” and there’s a low bar for deciding whether a taxpayer action can go forward that Tillman has met, Cantero said.

Tillman filed suit in July 2019 seeking permission to move forward with a taxpayer action that contends the deals violated the “specific purposes” language in the state’s debt clause because they failed to meet the threshold for establishing a specific purpose because some was used for general operating expenses and so amounted to deficit financings, which Tillman argues is not a permitted use.

Sangamon County Circuit Court Judge Jack D. Davis II in Springfield denied the petition to proceed after concluding the state had met the legal requirement on outlining the specific purposes, manner of repayment, and the legislation received the required three-fifths legislative vote. He concluded the complaint posed an unjustified interference with the application of public funds.

Tillman appealed, arguing the judge should only have considered whether the case was “frivolous” or “malicious” — language applied in past rulings — in deciding whether to allow it to proceed as a taxpayer action. The Fourth District Appellate Court agreed with Tillman and sent the case back to the circuit court to proceed.

In written briefs, the AG argues the litigation comes too late under state law, lacks the participation of bondholders with a stake in the deals, and on the constitutionality questions goes too far in interpreting language not included in state statute. Tillman counters that bondholders can join and that as the state makes ongoing debt service payments the challenge remains relevant and does not violate the statute of limitations.

On the question of taxpayer status, the state during oral arguments cited past rulings that permit the lower court to apply a “reasonable ground” review when considering whether to allow a case to proceed in addition to whether it is “frivolous” or “malicious” and that the circuit acted within its judicial discretion to apply it.

Justice Rita Garman questioned Huszagh over whether the case didn’t in fact raise legitimate questions over the debt clause. Huszagh argued the Tillman interpretation oversteps by reading into the constitution language that is not there and so the circuit court was right concluding that there was not reasonable grounds to proceed.

On the constitutional questions over state borrowing practices, Huszagh accused the Tillman team of trying to apply rules that govern short-term borrowing to long term debt.

Justice Michael Burke asked why the two should be separated based on transcripts of the debate drafters had at the state’s 1970 constitutional convention.

“I think there was certainly concern about issuing long-term debt for general purposes and I want to acknowledge that many people share the petitioner’s fiscal philosophy here which is that we shouldn’t just be running up long-term debt to pay current operating expenses, but the question is whether the constitution enshrines that fiscal philosophy as something that the courts are going to police,” Huszagh said. If the drafters wanted to ban certain uses for long term debt “they would have done so.”

Justice Garman questioned what level of detail is needed to meet the “specific purposes” requirement.

Huszagh in defending the state’s position argued that it’s a limited amount of detail “so there is accountability” and the state met it calling it “semantic gymnastics” on Tillman’s part to read into the language that there are permissible and non-permissible uses of debt. “They are trying to try to incorporate other statutes into debt rules,” he said.

Warlander withdrew its name from the lawsuit after Davis expressed concerns over the New York-based fund’s involvement during oral arguments last summer when the firm disclosed that it stood to benefit if the bonds were ruled illegal because of credit default hedges it had entered into involving the challenged bonds.

Gilead’s Stock is on Sale: Should You Buy?
Jim Carrey’s Los Angeles Estate Hits The Market For $28.9 Million
In monster quakes aftermath, a race to save lives as survivors grapple with their loss
GasLog Partners (GLOP) and LendingClub (LC): 11/3/2022 Bull & Bear
If You Invested $100 In Shiba Inu When The Coin Launched, Here’s How Much You’d Have Now