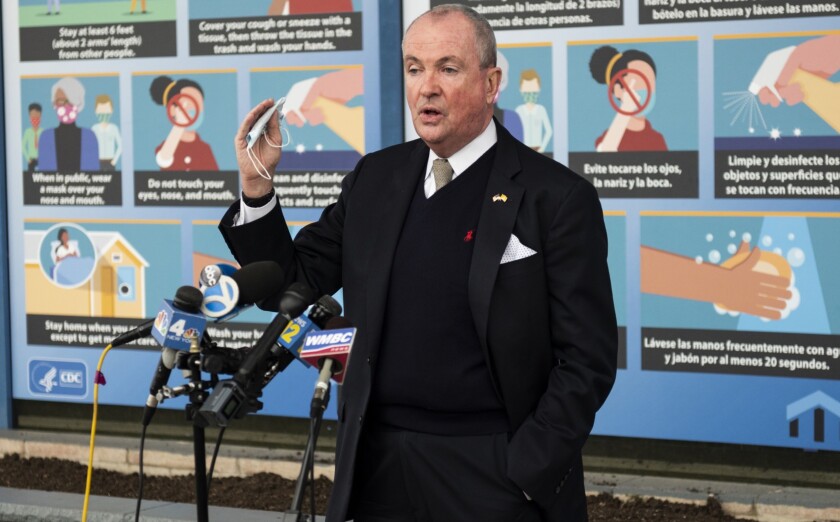 Gov. Phil Murphy’s $44.8 billion fiscal 2022 plan before lawmakers would raise spending by more than 10% and earmark about $6.4 billion toward pensions in what would be the Garden State’s first actuarially required contribution in 25 years.

Murphy, a first-term Democrat, is up for re-election this November as is the entire state legislature.

Pension shortfalls have made New Jersey one of the lowest-rated states.

While administration officials have touted the pension payment as a step in the right question, the response in the capital markets is largely wait-and-see, especially in light of the state’s $4 billion issuance of COVID-19 emergency deficit bonds in November.

“Just because they fully funded [pensions] a year early doesn’t impress me that much, when they also have other questions, such as how are they going to maintain spending levels once the federal money goes away and $4 billion has to be repaid,” said Howard Cure, director of municipal bond research for Evercore Wealth Management.

“I think it is challenging. In any budget you want to look at what’s necessary versus one-time.”

Murphy’s plan would also boost aid to school districts by $578 million; provide direct payments of up to $500 for low- and middle-income families; and $200 to $275 million for small businesses. There is no increase in municipal aid.

The 10% spike in spending “might seem perplexing to observers considering the status of state revenues in the middle of the COVID-19 pandemic,” said Tom Kozlik, director of municipal strategy and credit for Hilltop Securities.

“Although it may seem there is an improved financial picture — leading some to believe that is why the state is making a full actuarial pension contribution — nothing could be further from reality.”

Murphy, appearing on a webcast sponsored by the Volcker Alliance and the Penn Institute for Urban Research, said $5.6 billion, or 88% of the pension payment, is for delinquencies of the past 25 years. “Had we paid our full pension between ’96 and this budget, the number I would have put up this year would have been $800 million.”

While not mentioning Republican predecessor Chris Christie by name, Murphy said New Jersey had adopted a small-government orthodoxy coming out of the previous recession. “They shrank government, they shrank services,” he said. “They frankly shrank the metrics by which the rating agencies judge states, including surpluses and things of that nature.”

“Jersey’s not an easy state because it has a mixture of extremely wealthy, successful people and more than its share of very poor people, and there is always a delicate balance to be struck when you make critical decisions about the level of taxation, the level of borrowing, and the benefits to be accorded to public employees,” he said.

Richard Keevey, a former New Jersey budget director and comptroller for two gubernatorial administrations in the late 1980s and early 90s, called the $4 billion borrowing “probably one of the worst decisions, in my opinion.”

“The revenues had been understated. They’ve now been increased by $4 billion compared to what was originally projected by the governor over a two-year period of time,” he said on an online forum sponsored by the New Jersey Society of Certified Public Accountants.

“If the governor had waited a little bit before selling those bonds, which are non-refundable and were negotiated as opposed to competitively bid, we wouldn’t have had to sell the bonds.”

An analysis last October by Pew Charitable Trusts warned that New Jersey could not postpone or reduce pension contributions without risking collapse of the retirement system. the New Jersey state worker plan could run out of money in 12 years.

According to Pew, New Jersey’s state pension plans had a total liability of $212 billion as of 2018 but had set aside only $82 billion in assets, leaving a funding gap of $130 billion.

New Jersey had employer contributions of $4.7 billion in 2017, below the net amortization benchmark, meaning taxpayers would have needed to contribute an additional 33.1% of payroll to pay for both the cost of new benefits and interest on the existing pension debt. From 2017 to 2018, said Pew, state pension plan debt decreased by $11.6 billion.

“No one in an election year wants to make cuts in the budget,” Cure said. New Jersey conducts major elections in odd years, a rarity along with Kentucky, Louisiana, Mississippi and Virginia.

Murphy wants to fill a revenue gap by drawing down more than $4.1 billion of the state’s expected $6.3 billion in reserves for fiscal 2021, which ends June 30.

“If approved, FY22 spending would make budgeting more difficult in coming years as the new commitments would need to be supported along with an increase of [about] $300 million per year starting in FY23 to amortize the deficit bonds, not to mention regular expected spending growth,” MMA said.

“In other words, New Jersey’s near-term situation is better, but its long-term rating retention job has become harder.”

Budget sustainability, MMA added, could hinge on how New Jersey spends the roughly $6.4 billion it stands to receive directly from Washington under the just-signed coronavirus rescue package, the American Rescue Plan. Counties and municipalities stand to receive a combined $2.9 billion.

“If the state decides to use the federal funds for more new spending, its fiscal situation could become more precarious,” MMA said.

Legacy costs burden both state and local municipalities and consume an ever-growing portion of every annual budget, according to think tank Garden State Initiative. “As part of obtaining public buy-in on shared services, reforming our state’s legacy costs can only be led from Trenton,” GSI said.

The state’s reputation for business recruitment and retention is also at stake, corporate leaders argue.

“These are states that hold the line on taxes, hold the line on regulations and operate with fiscal discipline and we see New Jersey, unfortunately, continue this game plan of more borrowing, more taxing and more spending. That’s led to a historic outmigration of people, wealth and business, even prior to COVID.”

New Jersey’s attributes, he added, include a “critical mass” of colleges and universities, its transportation assets, and mix of urban and suburban areas.

“We have a double-edged sword. Our location still is our best calling card. So much of the nation’s population sits within a two- or three-hour drive of us, but this is an expensive place to do business,” said Rep. John Burzichelli, D-Paulsboro, vice chairman of the Assembly budget committee. “We have great legacy issues that are a burden in our state apparatus.” How do we crack this code? We’re open to all suggestions.”

High taxes and byzantine regulations have driven out some businesses, said Christina Renna, president of the Chamber of Commerce of Southern New Jersey.

“If you’re looking to create a business in New Jersey, especially here in South Jersey, it’s impossible not to look at Delaware and Pennsylvania, that have considerably lower tax rates across the board,” she said.

“We just recently had a member looking to relocate to another area in South Jersey and decided to go into northern Delaware. These are real stories that happen all the time.”