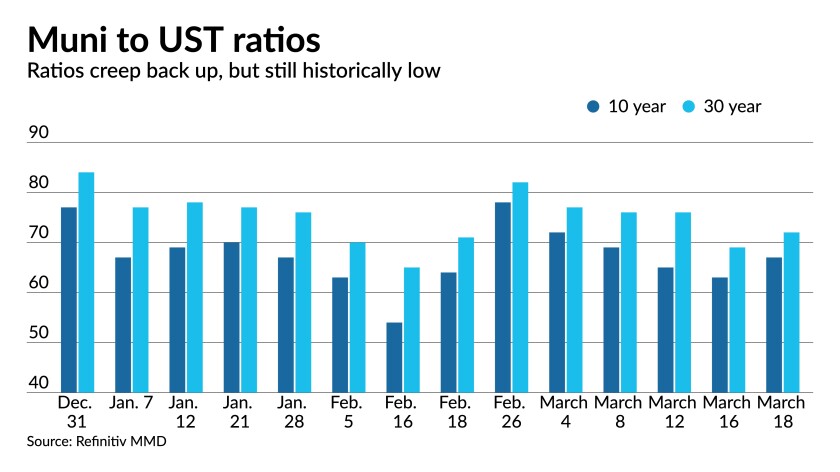 Municipal yields rose on the back of U.S. Treasuries as the asset class could no longer ignore the large swings in its taxable counterpart.

Looking at the volatility experienced since the beginning of the year, munis still are outperforming UST by larger margins. UST 10-year has risen 60 basis points since the start of January, while the 30-year has seen an 80-basis point increase. Munis in 10-years have climbed about 45 basis points, depending on the scale, and 30-year bonds have slowly risen just north of 40 basis points.

Flows will be an important indicator for how retail handles the volatility and subsequent headlines in the next few weeks.

In the primary, Morgan Stanley & Co. priced $1.86 billion of tax-exempt personal income tax bonds for the Dormitory Authority of the State of New York (/AA+/AA+/). In a repricing, yields rose three to seven basis points.

Details on a planned $302 million of taxable PITs were not available.

“DASNY, with its size and coming into the big spike in UST, might have been priced a tad on the cheap side to begin, so the cuts were not as severe as the secondary moves,” a New York trader said. “Bringing a multibillion deal in a market like today’s is no picnic. I’d say it did well.”

No details on whether it repriced were available.

The arrival of significant supply this week fared well with the buy side crowd, and boosting demand and aiding market performance, despite Thursday’s Treasury sell-off, buy-side sources said.

The primary market appeared to be less reactive than the secondary market, especially for issues rated A-minus and below, according to Jim Conn, portfolio manager for Franklin Templeton Fixed Income’s municipal bond team.

“Selling had been very benign in the municipal bond market until this morning,” he said Thursday.

Municipal bond prices in the secondary market for triple-A- and double-A-rated, larger trading names pulled back in line with U.S. Treasury prices in early action on Thursday, while Monday through Wednesday saw much more temperate moves, according to Conn.

Meanwhile, he said investor participation remained firm for new issues in the lower investment-grade categories and high-yield space, with some issues in that universe repriced with lower yields due to heavy subscriptions.

“Despite the sell-off on Thursday morning, it appears that the yield relationship between the markets will remain intact,” he said.

Economy
Once again on the surface the numbers released Thursday suggested a mixed picture of the economy, but analysts warned to not read too much into the labor numbers since they can be “volatile.”

Initial jobless claims unexpectedly jumped to 770,000 on a seasonally adjusted annual basis in the week ended March 13 from a revised 725,000 a week earlier, the Labor Department reported Thursday.

The general activity index hit a near 50-year high of 51.8 in March soaring from 23.1 in the prior month, surpassing the 23.1 economists predicted.

Just looking on the surface “could lead to erroneous conclusions,” said KC Mathews, executive vice president and chief investment officer at UMB Bank. The blip in claims could be explained by poor weather in late February and early March, he said, but the labor market recovery will continue.

Sarah House, senior economist at Wells Fargo Securities, agreed. “Claims can be noisy week to week,” but have been on a “downward trend,” suggesting while the “recovery remains on track it won’t be completely smooth.”

March nonfarm payrolls number could show a gain of between 200,000 and 300,000 jobs, Mathews said, and the unemployment rate could tick down to 6%, due to more people exiting the labor force, especially through retirement.

While the strength in the manufacturing report “suggests robust recovery,” he added, and “dovetails into our forecast” for GDP growth of 6% this year — with upside risk, that could bring it to 8%, much like the numbers from 50 years ago.

But it was the Philly Fed that “stoked” House’s attention. “It underscores the general strength of manufacturing,” despite “underlying constraints.”

But the Philly and New York surveys offer a look at prices received, which show whether the increases can be passed along, House noted. And those also show an upward trend.

While these numbers “right now are not worrisome since rises in services prices have been muted, if this keeps up with the broader reopening, it could be more worrisome,” she said. But, for now, inflation remains “relatively contained at a relatively benign level.”

Turning back to the reports, continued claims decreased to 4.124 million in the week ended March 6 from 4.142 million a week earlier.

The claims report “speaks to the widespread challenges caused by the year-old economic downturn, as some 18 million Americans received some form of jobless assistance in the latest week,” said Mark Hamrick, senior economic analyst at Bankrate.

Economists estimated a 0.4% increase in the leading index.

“The U.S. LEI continued rising in February, suggesting economic growth should continue well into this year,” said Ataman Ozyildirim, senior director of economic research at The Conference Board. “Indeed, the acceleration of the vaccination campaign and a new round of large fiscal supports are not yet fully reflected in the LEI. With those developments, The Conference Board now expects the pace of growth to improve even further this year, with the U.S. economy expanding by 5.5 percent in 2021.”

Christine Albano and Aaron Weitzman contributed to this report.

Stocks making the biggest moves after hours: Snap, Electronic Arts, Advanced Micro Devices and more
Stocks making the biggest moves midday: Chevron, Tesla, Seagate Technology, United Rentals and more
Rent prices have dropped the most in these 5 U.S. metro areas. Why it’s cheaper to rent in many markets
Tesla Analyst Reminds Musk Of Warren Buffett’s Advice To Steve Jobs: ‘If You Could Buy Dollar Bills For 80 Cents, It’s A Very Good Thing To Do’
Mega-mergers stand out amid a 2022 dip in hospital consolidation