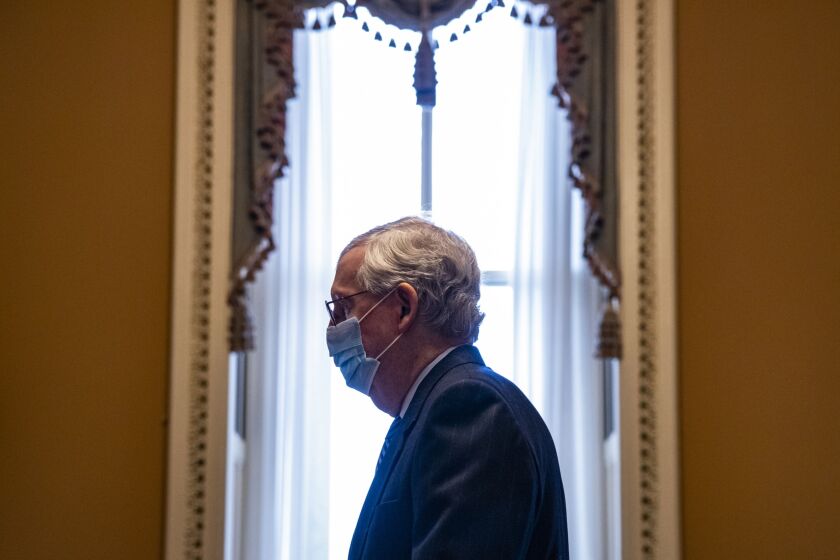 There is a strong possibility a highly anticipated major infrastructure bill won’t have any Republican support, a reality that would limit municipal bond provisions that advocates have been pushing for years.

Infrastructure advocates have called for a comprehensive bill by this summer, but some say that bill is likely to go through budget reconciliation — a tool Democrats can use to pass legislation by a simple majority in the Senate instead of the usual 60 required to get bill across the finish line in that chamber.

“There is great hunger on both sides of the aisle to do things, particularly in the transportation sector, but even more broadly on infrastructure on both the left and the right,” said Chuck Samuels, general counsel to the National Association of Health & Educational Facilities Finance Authorities. “The problem is going to be whether the greater politics screw it up. Either by delaying it, or worse, by making it much smaller and ambitious than what we would hope.”

Reconciliation, a tool created to allow lawmakers to conform tax and spending levels to the levels set in a budget resolution, can only be used twice this year and was used already to pass COVID relief this month.

Reconciliation is not the preferred way to pass legislation and limits lawmakers’ abilities to create new policy, limits Senate debate time and comes with a 10-year budget window. Since 1980, Congress has sent 25 reconciliation measures to the president, according to the House Budget Committee.

Samuels said at this point, the chances of the infrastructure bill using the reconciliation process are 50-50. Democrats have pushed for a climate-focused bill, while Republicans have been wary of raising taxes.

There is concern that budget reconciliation could limit the scope of municipal bond provisions being pushed by muni advocates. Those priorities range from reinstating tax-exempt advance refunding, increasing the federal cap on private activity bonds and reinstating a direct-pay bond.

Municipal bond provisions would still stand a chance if they do go that reconciliation route, though a ten-year horizon would be challenging. A reconciliation bill would mean all costs would have to be incurred within 10 years, which contrasts with bonds with a decades-long life.

The chances of a reconciliation path appeared to rise earlier this week when Senate Minority Leader Mitch McConnell told reporters that Republicans would not support tax increases.

“And the only way I think they could pull that off would be through a reconciliation process, they have one more of those available to them and my suspicion is they will try to jam everything they can into that bill, and call it an ‘infrastructure bill,’ just like they tried to call the bill a couple of weeks ago a COVID bill, which had 1 percent for vaccines, and 9 percent for healthcare and a whole lot of other things.”

“So yeah, I fully expect that’s what they’ll try to do, and that’s because I don’t think there’s gonna be any enthusiasm on our side for a tax increase,” McConnell said.

An infrastructure bill with at least some agreement on paying for it would make it easier for the bond provisions to become reality, Samuels said.

Samuels said the most likely outcome is there will be an infrastructure bill with municipal bond provisions which could go through the reconciliation process.

“The municipal bond provisions we’re talking about will be directly used for infrastructure,” Samuels said. “The very nature of municipal bond financing is projects will be done because you can’t issue the bonds unless you’re going to do the projects. They are relatively noncontroversial and would be very cost-effective.”

Through reconciliation, tax-exempt advance refunding would have a limited timeline and direct-pay bonds would have to fit within those 10 years.

“All of that would be undesirable from an economic stability point of view as well as for the fact that you’ve got to go back and have the same debate again,” Samuels said. “It’s not the best way to legislate, but it’s a way they legislate a lot of tax provisions.”

Municipal bond provisions have bipartisan support, with just last month, Sens. Roger Wicker, R-Miss, and Debbie Stabenow, D-Mich, sponsoring a bill to reinstate tax-exempt advance refunding. Other bills are expected to be reintroduced in this Congress by bipartisan groups of lawmakers.

Timing too is an issue for passing an infrastructure bill and if other legislation is prioritized first, such as immigration, Samuels said.

Municipal bond provisions could fit into a tax bill, but that is not what is on the table, Samuels added.

Tom Kozlik, Hilltop Securities’ head of municipal strategy and credit, called the chances of infrastructure passing through reconciliation as a “strong possibility.”

“There are greater differences in how each party describes or defines ‘infrastructure’ than what popular opinion really understands,” Kozlik said. “Therefore there is the potential that Democrats may have to go at it by themselves unless they are able to conjure up some bipartisan support for shared ideas.”

House action last year with the Moving Forward Act is promising, Kozlik said. That bill died in last year’s Republican-controlled Senate. That bill had many municipal bond provisions including a direct pay bond, an increase to $30 million from $10 million for small borrowers for the amount of tax-exempt bonds they can issue in a year and remain eligible to sell them to banks under favorable bank-qualified status.

Some are optimistic about lawmakers finding bipartisan footing to pass an infrastructure bill.

“That’s (reconciliation) always a fallback,” said Slater, who is also a partner at Squire Patton Boggs. “It would frankly be much better and I think all of the parties recognize that as well, that it would be much better if they could have a sort of bipartisan effort that does what needs to be done. It’s not like anyone believes that our system is funded as it should be funded and that our policies regarding infrastructure investment are as up-to-date and as progressive that they need to be.”

Even if reconciliation does happen, there is some certainty for state and local governments, Slater said, citing the most recent COVID-relief plan which provided $350 billion for municipalities.

“The benefits can still be tangible, it’s just that there is always a greater quality for endurance and for longevity when you’ve got a bipartisan effort,” Slater said.

Slater also noted that while muni bond advocates may want to permanently bring back muni provisions, no legislation is permanent.

On McConnell’s comments this week, Slater called it “posturing” and was not surprised.

“Early on in any kind of process, you have posturing that takes place and it’s important to acknowledge and respect that,” Slater said. “But it is what it is, it’s posturing.”

Prospects rise for NY charges against Trump in Stormy Daniels case
Survey says: 2023 issuance will be the same; rates will rise
In monster quakes aftermath, a race to save lives as survivors grapple with their loss
Israel’s Supreme Court Chaos: An Issue US Christians Should Care About?
Munis slightly firmer after Fed hikes rates 25bp