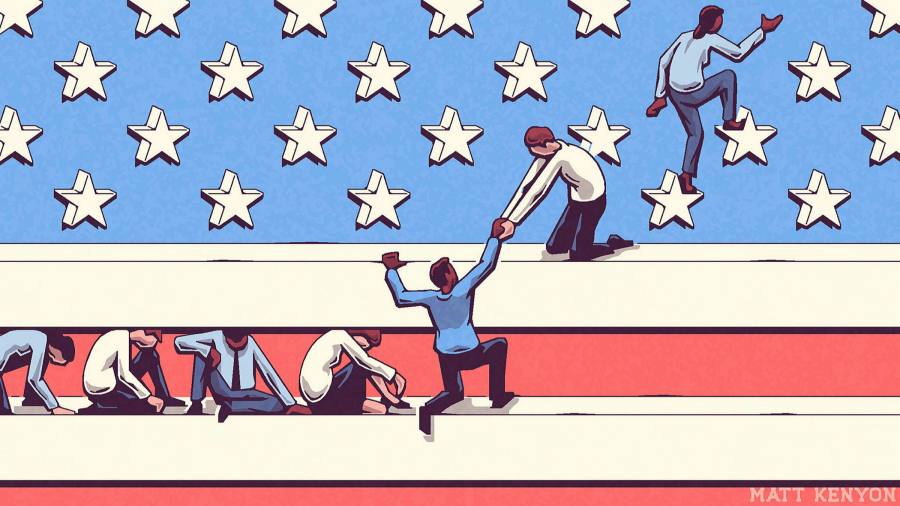 Once every generation or so, America’s social contract changes. After half a century in which capital has been in the driving seat, Joe Biden has a chance to tilt the advantage back to labour.

Such an opportunity would have been unthinkable a year ago. The US left can thank the pandemic for this change in the political weather. Biden has so far not let the global health emergency go to waste. The question is whether he can build on the recently passed fiscal stimulus to shift bargaining power towards the American worker.

The macro-conditions Biden faces are close to ideal. With the US set to reach herd immunity in the early summer thanks to its vaccination programme, growth will come roaring back as social distancing recedes. The coming boom will be fuelled by the release of pent-up consumer demand that has pushed America’s personal savings rate to a record high, now being lifted even higher by the latest federal stimulus. Growth is expected to top 6 per cent this year, according to the Federal Reserve, which will more than erase last year’s losses.

The central bank’s stance is about as dovish as it can get. This week Jay Powell, the Fed chair, basically guaranteed that he would tolerate inflation above 2 per cent for a sustained period. The Fed does not expect to lift its benchmark interest rate before 2024. Rarely do central banks promise to keep the punch bowl filled as the party gets going. Biden is inheriting an optimal two-year window to spread the fruits of unchecked growth to America’s middle classes.

On its own, however, a strong US rebound will not change the structure of the economy, nor do much to dent America’s acute inequality. Most of the income portions of the $1.9tn American Rescue Plan Act consist of one-off transfer payments and an extension to unemployment payouts. They will comfortably tide people over the pandemic. The question is what Biden can do to alter the rules of the game for the long term after the economy returns to trend growth.

The starting point is to acknowledge that America’s median income stagnation is in some part the result of decisions taken by politicians. Until recently, the left and right agreed, as Bill Clinton once put it, that globalisation was “the economic equivalent of a force of nature”. It followed that there was little government could do, other than encouraging people to boost their skills, to shield Americans from the global chill winds.

This was a cop out. Since the 1970s, Washington has done plenty to weaken the power of trade unions, cut social insurance and allow educational costs to increase beyond the reach of ordinary Americans. Instead of cushioning such trends, successive US administrations, including Democratic ones, leaned in further.

Tony Blair, the former British prime minister, once said: “I hear people say we have to stop and debate globalisation. You might as well debate whether autumn should follow summer.”

Today both left and right are happy to have that debate. But they are nowhere near consensus. The Republican party tends to blame China almost exclusively for America’s middle-class struggles. Leftwing Democrats prefer to target America’s super-wealthy. Neither side focuses enough on the downward impact of technology on the price of American labour. The remedies for this come in three tranches: boosting US labour productivity; ensuring that workers take those gains in higher pay and benefits; and lifting support for those left behind.

The first is basically the goal of Biden’s Build Back Better programme. He wants to pour money into green technology and broadband. The second involves boosting employee leverage and tackling oligopoly across the US economy. All three entail making the US tax system more progressive.

However, each of these, particularly a $15 minimum wage, higher corporate taxes and pro-union legislation, are likely to run aground on Senate obstructionism. It is quite possible that Biden’s historic window will slam shut in the coming weeks.

At which point he would face a choice: embrace Senate majority votes by scrapping its 60-vote filibuster, or allow the US economy to drift back to pre-pandemic rules. The latter would be tolerable. After 40 years of stagnation (barring a strong blip in the 1990s) median income grew between 2015 and 2019, mostly because of falling unemployment. Jason Furman, a Harvard professor and former chair of the Council of Economic Advisers, estimates that the middle class recaptured about a tenth of what it lost in those years. But at that rate, and assuming no recessions, it would take another 40 years to regain its share of the economy.

My bet is that circumstances will push Biden down the more radical path. More than 70 per cent of Americans support the stimulus, including a majority of Republicans. Donald Trump proved two things about US politics. First, rightwing voters are fine with budget deficits, as long as they benefit. Second, they are highly receptive to cultural and racial appeals.

Biden, in other words, has a chance to take the sting out of US populism with a game-changing economic agenda. It is a historic opening that is unlikely to come again soon. He must weigh that against the cost of preserving the Senate veto for a party that increasingly talks only about culture. As time goes on, it will seem like no choice at all.

House GOP struggles to unify over budget ideas
Crypto firms could face 2 years jail for breaching UK advertising laws
Iron Condors: 101 What is it and How Does it Make You Money?
Earthquakes rock Turkey and Syria leaving thousands dead
PRAY: Police Search For Answers After NJ Christian Councilwoman Killed Outside Her Home