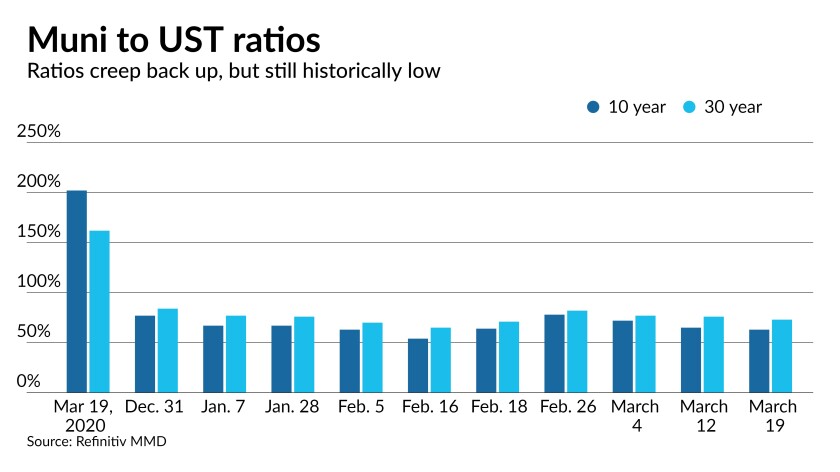 The municipal bond market was quiet Friday after a volatile week that saw 10-year U.S. Treasuries hit one-year highs and hold there following comments by the Fed that it apparently dismissed.

Federal Reserve Board Chairman Jerome Powell press conference didn’t necessarily change the market’s opinion that the Fed will need to move before 2023 and municipals went along for the UST ride.

Triple-A benchmark yields were little changed Friday, save for a two basis point bump on the one-year, while ratios held to recent levels. Municipal to UST ratios were at 67% in 10-years and 73% in 30, according to Refinitiv MMD, while ICE Data Services showed ratios at 164% in one year, 66% in 10 years and 74% in 30.

Accelerated selling took hold this week and while yield adjustments were meaningful, they still didn’t match the back up in taxable rates, said Kim Olsan, senior vice president at FHN Financial.

“The dynamic behind tax-exempt yields being held more in check has to do with upcoming reinvestment needs and the longer-term picture of tax preservation,” she said. Fund flows, she and others note, are also providing a supportive tone with both Refinitiv Lipper and ICI reporting $1 billion-plus figures in the latest week.

Fund flows were in the black again this week with $1.267 billion, and analysts and traders say the fund complex will be key to how munis perform for the remainder of the month and into April. High-yield muni funds, which were hit with large outflows after the mid-February correction, reported inflows of $650 million in the latest week, after inflows of $429.806 million the previous week.

A year ago to the day, the municipal market was imploding in real-time. Billions were being pulled from funds and the primary was all but shut down.

It’s remarkable to look at the market a year later and see five to 10-basis point moves described as a sell-off when last year 25 to 50 basis points in a day became near normal and the yield curve inverted.

As munis entered 2021 at extremely low rates and mostly ignored U.S. Treasuries for the first month and a half of the year, pockets of volatility are hard to avoid.

Initially tax-exempts were holding up well to the volatility in UST, but in a repeat of their sell-off earlier this year, tax-exempt muni yields finally caught up with Treasuries, with MMD-UST ratios moving up from extremely overbought levels, analysts with Barclays wrote in a Friday report.

“Munis (especially muni high-yield) have been outperforming most other fixed income asset classes this year, but their performance year-to-date has also been negatively affected by higher Treasury yields,” the report noted. “Although their spreads tightened this year, the total return performance of taxable munis has been negatively affected to a larger degree than tax-exempts, due to their longer durations and higher rate sensitivity.”

Investors have a lot of cash, and fund flows have been supportive thus far while tax-exempt supply has been manageable, Barclays said.

“In our view, tax-exempts will likely continue outperforming Treasuries and most other fixed income asset classes; but we believe that investors should brace themselves for some volatility ahead, and they will likely have a better entry point down the line.”

In the span of two days this week, about 15 basis points have faded from earlier gains this month, Olsan noted.

After corrections, the 10-year spot has retreated to its level from May 2020 while the 30-year spot is on parity with its yield from the end of February (the next leg up would revisit last May’s range). Greater volatility in recent sessions has created better buying conditions, though, she said.

“Over the last year, 24 weeks have seen yields remain unchanged or rally — so that when higher yields are presented buyers have shown more willingness to step in,” Olsan said. “Overall, March stands out as the month when these situations occur the most frequently. Since 2000, the month has posted losses in 12 of those years on rising yields by month-end. April has posted losses in only seven of those years as yields generally recover from March weakness.”

Municipal holdings are also changing. Fed flow of funds for Q420 were released late last week. As expected, mutual funds added quite a bit, and led other muni buyers. Aside from mutual funds, banks and property and casualty companies continued adding to their muni exposure, but at a slower pace than before, Barclay’s noted.

“There has also been significant buying from P&C and foreign investors (mainly focused on taxable munis). Demand from life insurers and retail remained rather tepid, while broker-dealers continued trimming their exposure,” the report noted. “Corporate spreads have widened in the past several weeks, and if rates continue moving higher with credit spreads widening, taxable muni spreads will likely follow, in our view.”

Economy
Powell in his post-FOMC meeting press conference clearly stated the Fed’s intentions, but didn’t necessarily change the market’s opinion that the Fed will need to move before 2023.

Near the close Friday, the 10-year Treasury yield was 1.73%, nearly 100 basis points above its level from a year earlier, which has investors concerned about inflation.

While base effects and pent-up demand will lead to a short-term spike in inflation, these do not translate to the sustained inflation that would mean rate hikes, he said. And the Fed probably enjoys having the market do some of the heavy lifting, while financial conditions continued to ease.

Steven Skancke, Keel Point chief economic advisor, agrees the Fed is in “no hurry to pump the brakes.”

Powell made clear he wants “substantial actual progress” rather than projections of maximum employment and 2% inflation before the Fed would remove accommodation.

“The markets are hearing the Fed,” he said, “but are not yet ready to surrender to its roadmap and until the 10-year Treasury settles at 2.”

Skancke, said markets are “fixated” on inflation and are “misreading the steepening yield curve,” seeing it “as the harbinger of inflation instead of confirmation of belief in the higher economic growth estimates,” he said. “There is a significant amount of price inflation absorptive capacity in the global economy, so it is hard to see how inflation gets out of hand or becomes problematic in 2021 or 2022.”

While the Fed and the markets have had divergent opinions previously, Gary Pzegeo, head of fixed income at CIBC Private Wealth, this time, “longer bonds, Treasuries in particular, are more concerned with inflation than the overnight fed funds rate.”

When compared to commodity prices, he said, “the 10-year Treasury is behaving rationally,” with the security reflecting market-demanded risk premium against future inflation. “This inflation premium is currently in line with commodity prices.”

Also, the Fed’s average inflation target framework. “Reactions indicate that markets either see longer-term risks to inflation, or near-term risks of the Fed wavering from this new approach,” Pzegeo said. “If inflation gets away from the Fed and rises to 3%, they’ll be forced to be more disruptive.”

Zhiwei Ren, managing director and portfolio manager, at Penn Mutual Asset Management, said, inflation could be more than “transitory,” which would force the Fed to “tighten more aggressively later,” exactly what the market fears.

“The only way other than time that will determine who is right, will be to watch wage inflation. If we get that, that means inflation will be much more sustained.”

Pzegeo added that some concerns are also stemming from that fact that the new, “easier” policy framework comes at a time of cyclical recovery and economic re-opening.

Nigel Green, chief executive and founder of deVere Group, expects “a short-term jump in prices” as the economy reopens. “However, longer-term inflation fears, due to pent-up demand are premature and are being overplayed,” he said.

“Expectations of a sudden surge in consumer and producer price inflation associated with easy monetary and fiscal policy likely are overdone,” according to a Conference Board report authored by Dana Peterson, executive vice president & chief economist, principal economist Erik Lundh, and Research Analyst Gurleen Chadha. “Price increases anticipated with the rotation of household purchases from goods to services probably will be transitory, especially as pre-pandemic disinflationary pressures reassert themselves.”

Refinitiv Lipper reports $1.3B inflow
In the week ended March 17, weekly reporting tax-exempt mutual funds saw $1.267 billion of inflows. It followed an inflow of $1.092 billion in the previous week.

The four-week moving average remained positive at $448.069 million, after being in the green at $620.074 million in the previous week.

Rumor has it that Dogecoin could shift to proof-of-stake — What does that mean for miners?
Government Keeps Meddling With Private Company Decisions
Here’s How Much A $1,000 Investment In Tesla Stock Will Be Worth In 2030 If Ron Baron’s Price Target Hits
Malaysias housing debate takes racial turn after government plan to consult S'pore's HDB
Huawei NFTs, Toyota’s hackathon, North Korea vs. Blockchain: Asia Express